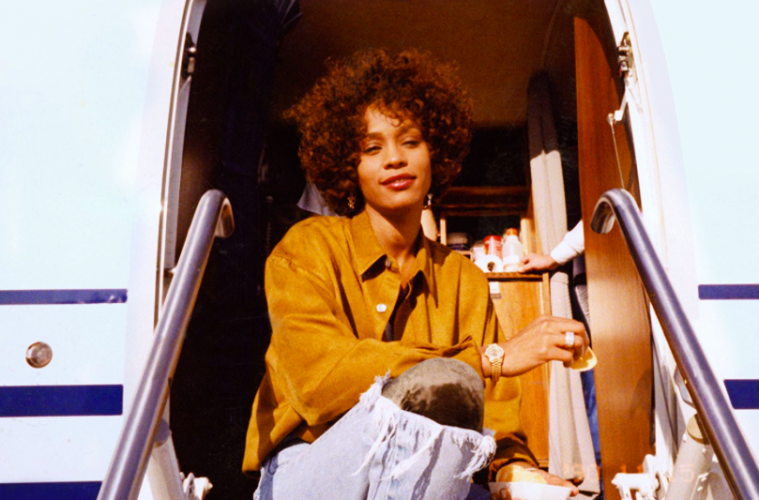 Whitney Houston broke more industry records than any other female singer in history. With over 200 million album sales worldwide, she was the only artist to chart seven consecutive U.S. Number 1 sales. She also starred in several blockbuster movies before her brilliant career gave way to erratic behaviour, scandals and death at age 48. A new documentary feature WHITNEY is an intimate portrait of Houston and her family that probes beyond familiar tabloid headlines and sheds a new light on the spellbinding trajectory of Houston’s life.

Using never before seen archival footage, exclusive demo recordings, rare performances, audio archives and original interviews with people who new her best, Oscar winning filmmaker Kevin Macdonald (The Last King of Scotland, Marley, State of Play) unravels the mystery of the singer who thrilled millions even as she struggled to make peace with her own troubled past.

The documentary will open in North American theatres this July.

Houston first began singing in public at the age of 11  at the Newark’s New Hope Baptist Church. Her mother, Cissy was also a singer however, she never reached the heights she had hoped for as a solo artist, demanding perfection from the young Whitney as she coached her for musical stardom.

After her parents divorced, Houston left home to pursue a modelling career in New York City. But it was Arista Records president Clive Davis who took note of her singing and signed Houston at 19 years old and her first album was released when she was 22 years old.

In 1985 she released her first hit, “Saving All My Love For You”. Houston scored six more consecutive number 1 singles, seven Grammy Awards, and a starring role in the The Bodyguard, which featured her smash-hit ballad “I Will Always Love You.”

“…Whitney Houston herself tended to give so little away in her own interviews, we had to use a multiplicity of voices,” said Macdonald.

But it was the interviews with members of the family that are the most illuminating. Her older brothers Michael and Gary openly discuss the drug use that surrounded the singer most of her career. They also talked about her pivotal childhood experiences.

“This is a family with a lot of secrets,” said Macdonald.

While the life and times of Whitney Houston have been chronicled before, WHITNEY offers
unprecedented insights into the woman who galvanized audiences around the world even as she
struggled to keep her personal demons at bay. “What I hope people take from the film is that
we’re telling a really complicated family story about somebody who’s normally analyzed as a
tabloid star,” says Macdonald.
This is the first documentary on Houston made with full cooperation of Houston’s family.
UPDATE: CONTEST IS NOW CLOSED. THANK YOU FOR VISITING!
CONTEST:
ENTER for a chance to win 1 of 5 screening passes (each pass admits 2 adults) to see WHITNEY during the film’s run of engagement screening at a theatre nearest to you. To enter, name your favourite Whitney Houston song — give us your answer in the comment section below AND let us know what city you live in. Contest begins July 9, 2018. Contest ends July 12, 2018 at 12:00 noon EST. Selected winners will be notified via email. No purchase necessary.
Open to Canadian residents only who have reached age of majority – excluding Quebec. Prize does not include transportation and must be accepted as awarded. Mathematical skill-testing question will be administered and must be correctly answered to be declared winner. One entrant per email, per day accepted.
Good Luck!
Tweet
Share
Share
Pin
0 Shares