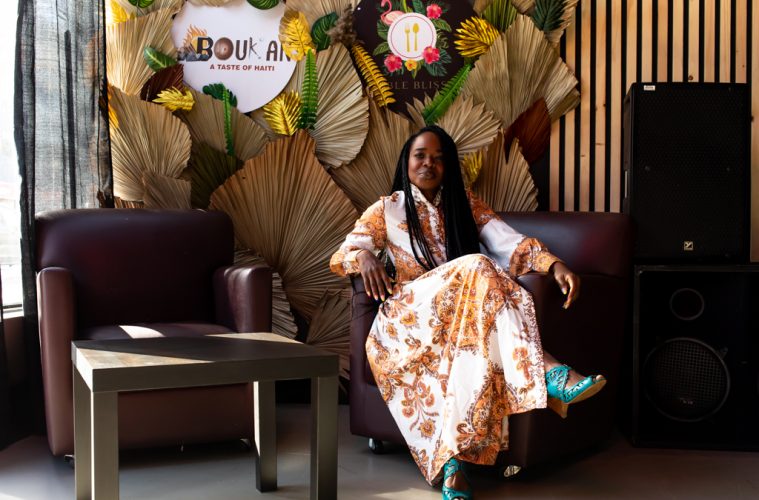 Owning your own restaurant is an achievement in and of itself. I would aruge no one understands that accomplishment better than Amanda Hamer. Her rise to owning her own restaurant, Boukan EdibleBliss (with co-partner Amir) has been on her radar since her childhood. Formally joining the restaurant, Amanda brought her talents to The Danforth in this merge of Haitian-Caribbean food.

We caught up with this busy chef to see how things are cooking at her very own restaurant.

WELCOME TO THE DANFORTH, QUEEN

Amanda’s path to culinary entrepreneurship was something her mother, who’s now passed, was always encouraging. “I remember her telling me stories of me playing in the toilet bowl pretending I was making soup! I used to bang on pots and pans. She always knew I had a love for food. I would ask her questions her Guyanese recipes and why she did things a certain way, always learning,” shares Amanda.

That exhuberance and love for food, even at such a young age carried through to community camp in Regent Park. Making cakes and pies at camp led to high school classes, and eventually, George Brown College. After graduation, Amanda worked at a few restaurants in Toronto, but honed her skills for catering and grew her curiousity for quality foods while at Pusateri’s.

After working the line at DW Alexander, a now-shuttered bar at by St Lawrence Market, Amanda grew uninspired. “I could literally do the whole shift with my eyes closed,” said Amanda. Knowing it was time to call it quits was one thing, but what to do next was another.

With two children to care for, and the courage and determination to desire change, Amanda quit and started EdibleBliss11. The feedback was tremendous. Her catering business was making waves, with a feature on Breakfast Television and various media outlets, her future was looking secure.

That’s when Boukan came calling. The owner, Amir, knew of Amanda’s talents and was persistant in having her vision attached to his restaurant. Amanda had never cooked Haitian food before, but quickly grew confidence in the kitchen. Their blend of Caribbean-Haitian cuisine has been a hit with their repeat and new customers.

BRINGING THAT CARIBBEAN CULTURE TO HER CITY

Fans of EdibleBliss11 can take comfort in knowing many of their favourite dishes, including the famous Jamaican Rum Cake Cheesecake, which regularly sells out at Boukan EdibleBliss are on the menu still. Brunches prove popular, with live music adding a dynamic new energy to this stretch of The Danforth.

But Amanda is honest in how her commitment has changed her life.

“Right now, there’s no days off. I just take extra long showers, I meditate, I pray. I was dating, but that didn’t work out. Right now, I am just pretty much here all the time. That’s my life now.”

Book ahead for party time, Boukan EdibleBliss offers buy-outs and offers reservations to all parties.