The Toronto premiere of the award-winning production DETROIT by Lisa D’Amour is about the death of the suburban ideal — that if you do the right things and work hard, you will be safe and life will work out for you — which is an increasingly pervasive idea in the post-Trump, post-pandemic world. A darkly-comic, searingly acute observation of the effects of deep economic uncertainty on the middle-class, D’Amour’s play revolves around two suburban couples meeting at a barbecue in a first-ring suburb just outside a city that might be Detroit. As the action unfolds, one couple reveals that they met at rehab, and neither is employed. A quintessential cookout quickly turns into something more dangerous. The show feels particularly poignant now reflected against our own current economic precariousness and ever-shrinking middle class.

DETROIT originally premiered in Chicago in 2010 and subsequently ran Off-Broadway in the fall of 2012. The hit play was shortlisted for a Pulitzer prize in 2011 and won an Obie award for Best New American Play in 2013 and has a history of star studded casts, including performances by Amy Ryan, Laurie Metcalf and David Schwimmer.

This play also marks Diana Bentley’s first show back with Coal Mine Theatre here in Toronto and stepping on stage as an actor. If you’re not familiar with Diana, she’s a Canadian film and stage actress most known for her roles in Frontier, Channel Zero and The Expanse. She’s also the Co-Founder and Co-Chief Engineer of the Coal Mine Theatre with her partner Ted Dykstra. 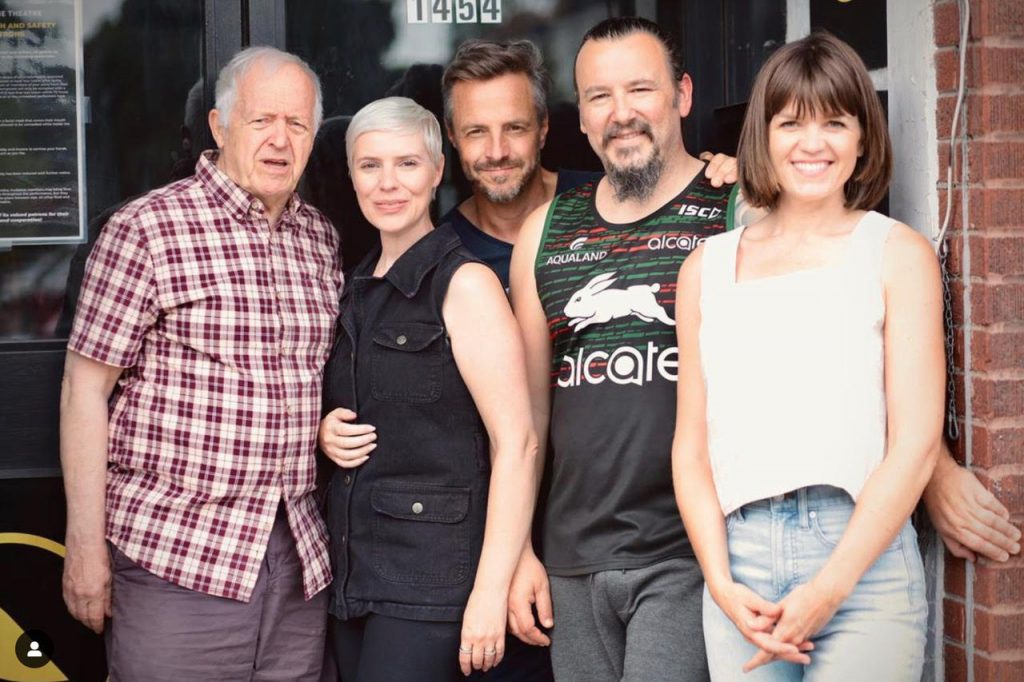 I’m so excited that live and in-person performances have returned to our city! What’s the feeling over at Coal Mine Theatre as the cast and crew are getting ready for the upcoming production, DETROIT?

Diana: Detroit is a pretty massive show. Without spoiling it- there are a lot of tricks, stunts and events in it that make it both very exciting and also a huge challenge! Our Director Jill Harper is doing such a wonderful job of guiding the acting but also trying to figure out how to make this show make in such a tiny space as the Coal Mine. We programs shows like these- that have been on Broadway or in big theatres because it’s incredible to see them in the intimacy of the Coal Mine but that’s also such a big juicy challenge for all of us.

Can you tell us what drew you to this play at this point in time?

Diana: I read this play probably five or six years ago. Essentially it’s about a suburban couple who are coping and holding together and the storm and chaos they are met with when another couple moves next door. When we first read it out loud in 2017 it was funny and fun but it didn’t quite resonate. Somehow now, after we have all be shut inside for two years in our own tiny worlds- Detroit feels so much more resonant than it did then. It touches on these themes of community, love, relationship- what do we yearn for in this life? To be free? To be seen? To be safe? It asks all the questions we were all met with these last three years. Oh and it’s fu***ing funny and I think we all need a laugh right now!

While many of the larger-scale theatre companies in Toronto had some help over the pandemic, how did you manage?

Diana: Honestly— our core donors and our audience. We still don’t have many grants, no operating funding. We exist because our patrons love us and they fight for us. And that’s what happened. They were so generous. That’s why we are still here.

What do you wish theatre-goers to know now during this adjustment period of returning to in-person performances?

Diana: It’s anxious making. I watched The Antipodes cast (our last show) have to worry about so much extra stuff. Covid tests, masks, symptoms, distancing. It’s a lot. And we feel the strain and we show up on stage and in a way- make ourselves vulnerable because we are so passionate about story telling. It’s worth it to remember how much it cost artists to do this and to not take it for granted in a way. Companies like us need the support and understanding of our audience. Luckily we have that.

What have you learned during these pandemic times?

Diana: Not to take the little stuff for granted.

While the theatre company has decided to limit seating to ensure audience safety, it will offer an extended show run. Coal Mine Theatre also continues to maintain a masking and proof of vaccination policy (check site for updates and any changes).

Tickets are now available https://tickets.coalminetheatre.com/, beginning at $35 for previews and arts workers and ranging from $60-72.50 for regular performances. Performances are scheduled from July 8 to August 7, Tuesdays to Saturdays at 7:30 p.m. and Sundays at 2:00 p.m.

Big thanks to Diana for taking the time out to chat with us! xx