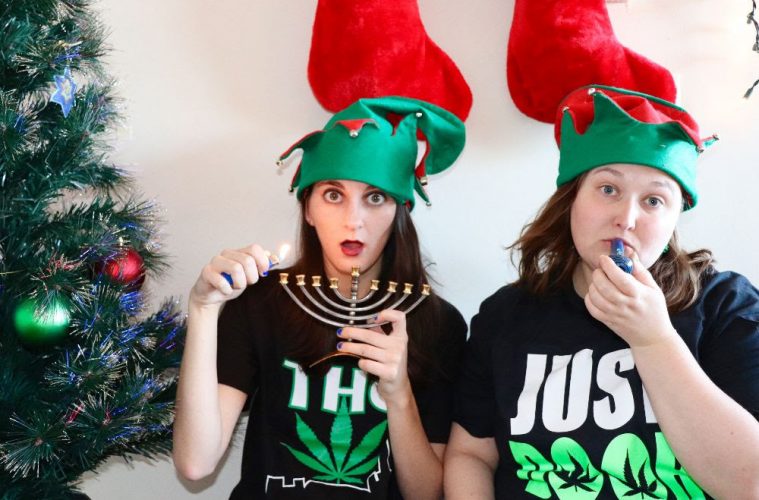 Comedians Rachel Manson and MK Morris gets High on Hallmark

Hallmark holiday movies have always been popular. They’re predictable and full of cheese but we still turn to them. Why? Why not? When we just want to not get out of our pyjamas and stuff our faces with a bucket of popcorn, it can be a perfect night in! BUT,  what if you want to take your Hallmark movie night to the next level? ` Comedians Rachel Mason and MK Morris will blissfully take you there with High on Hallmark (or Comedians Getting High and Watching Hallmark Movies) nights!

If you’re wondering about “high”….uh, yes, you are going in the right direction. The dynamic duo is bringing their next level hilarious “High on Hallmark” nights to the Comedy Bar in Toronto.

High On Hallmark began as a live streamed web series. Comedians Rachel Manson and MK Morris would invite their favourite Canadian comedians to join them on their couch, get high, and watch infamous Hallmark movies. After a popular run online, they are stoked that their little weird stoner obsession has become a sold out monthly live show at Comedy Bar.

Can you believe that Hallmark made-for-tv movies are still a thing?

Rachel and MK: Yes and no! Watching these movies feels so outdated in a way, like they are stuck in time in the early 2000s, unchanged by anything that has happened culturally or politically in the past 2 decades. But I think for the same reason, that’s why they are still thriving today.

So many retreat to Hallmark as this bit of escapism, never challenging or shocking, because there is nothing quite as comforting as knowing the formula. seeing it play out exactly as expected – well, human brains love a trope! In some ways, we totally get it because we all need that bit of holiday comfort. On the other hand, like when it comes to diversity and female roles…maybe some change is good.

The movies have always been so predictable, but you’re bringing next level fun. Any memorable moments you can share with us?

Rachel and MK: Oh my god, so many. I remember the first time we watched A Shoe Addicts Christmas with Youtube personality and comedian Carley Thorne on our web series – it was one of the weirdest films we had seen so far and I never laughed so hard talking about the time traveling aspect of the movie. It was bonkers. Another memorable moment was watching a group of middle-aged women sing “Yankee Doodle Dandee” to pumpkin seedlings so they’ll grow – WHO WROTE THAT? WHY??

In our last live show with comedian legend Hisham Kelati, we had to skip forward in the movie’s 3rd act because we were running out of time for our slot at Comedy Bar, and the scene we were watching of the two main characters in this coffee shop was taking forever. We skipped ahead a huge chunk and when we landed almost half an hour later, the two characters were still sitting in the exact same frame, exact same shot, in the exact same coffee shop. The audience went berserk and we laughed so hard.

Anyone at Hallmark come at you, yet?

Rachel and MK: Since almost all the Hallmark movies are filmed in Ontario, we actually have so many friends who act, work and write on these films that ask to be guests on the show and we LOVE it! During the pandemic, our friend Andrew Bushell, who was the star of a Hallmark adjacent movie, came on the show and we watched his movie. It was a riot. If any Hallmark execs happen to be reading this interview, please know we mock because we love (to mock).

Rachel: In my ideal romantic storyline, I would want to be the first female lead in a hallmark movie to call out the male love interest for gaslighting and run back to my awesome high powered job in the big city away from men, but that’s just my dream scenario.

MK: I’m writing a movie about two production assistants that fall in love on a crappy Christmas movie shoot, it’s inside baseball enough to make me cackle just thinking about it.

Following along virtually is one thing…now you’ll take the commentary live and in person. What should we know?

Rachel and MK: We have been super lucky to find a home at our favourite venue in the city, Comedy Bar. I said from the beginning that I wasn’t going to take the show live unless it was covid safe. Comedy Bar checks vaccination status of everyone before they enter the club so we know we’re not letting in any covid crazies.

In terms of getting high, we are sponsored by the incredible dispensary Blunt and Cherry.  Thanks to them, the audience gets to take home some great discount cards and weed fun. Maybe one day our favourite hot box level indoor smoking venues will come back. For now, we join the audience 10 minutes before the show on the steps of the club to smoke sponsored weed. About a quarter through the movie we also take weed gummies to hit later in the film. So things get pretty wild by the end.

High on Hallmark will take place in-person at the Comedy Bar, Cabaret Theatre at 945 Bloor Street West, Toronto. November 10 and December 8 tickets start at $17. For more info or to purchase tickets visit www.comedybar.ca

MK Morris is a producer, writer, comedian, and AD with 10 years of experience in the TV/film industry. She has worked with Disney, Ubisoft, and her favourite job was assistant to the Baronesses for the final season of CBC’s Baroness Von Sketch Show. She has received numerous accolades at festivals for her writing and directing. In addition, she was contracted to write multiple features and treatments for various production companies.

MK has produced shows at The Second City, SoCap, Comedy Bar, and has collaborated with many local comedians. She has also served as a producer/script editor for the sketch comedy channel Wishful Genies. MK’s proudest moment is winning $1000 and a two-year option from a pitch competition that she only entered because of a tarot card reading.