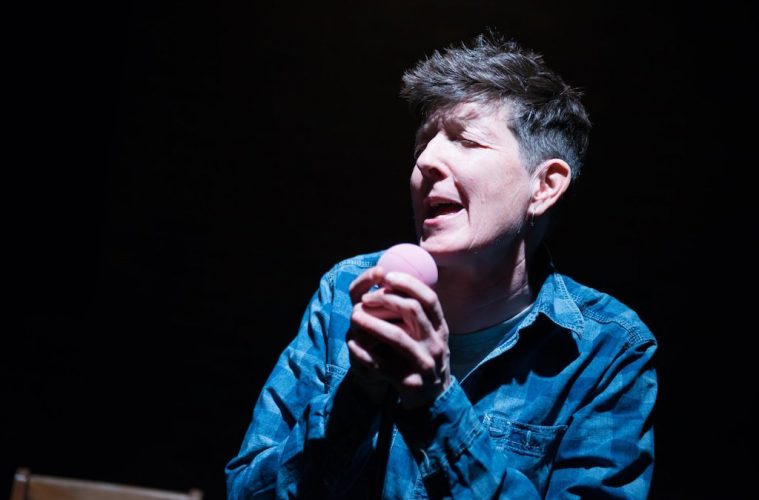 West coast comedian Jan Derbyshire is in Toronto during the Progress Festival with her one-person show Certified — a hilarious and heart-aching journey through the mental health system. In the show, Jan tells the audience all about her experience being “certified” a total of eight times, and how she got to where she is today. This memoir-play cracks open the stigma around mental health and turns the audience into a mental health review board to help determine her current state of sanity.

We had a chance to interview Jan and learn more about her show and well, open our eyes more to mental health.

What made you decide to create Certified?

JD: There are just so many negative representations of people with mental illness in theatre and film and television, often written and performed by people who haven’t experienced mental illness. And these characters are almost always twisted or broken. You know, we murder people or kill ourselves, or both (Current example: The Joker). In my experience and with a lot of MAD people I know, it is not like that at all. So I wanted to show a living example of someone who lives with mental illness and is good at what they do and is not cured but deals. I also wanted to let people know, in an entertaining way, somethings they might not know about our mental health system in Canada. Like, when you’re certified, or what they used to call committed, you are incarcerated and lose your rights. And as always, I wanted to see what humour I could wring from tragedy. It’s a thing.

As a one-woman stand-up comic, we’re curious as to what motivates you to get up on stage each time?

JD: On a good day, it’s because I like to make people laugh, I like to move them with stories and lead them to feelings inside the safety of a show and maybe to different ways about thinking about things. On a good day, I love the rush of performing and the electric connection to an audience. On a bad day, I just show up and do it because it’s my job. Most of my days are lived somewhere in between good and bad.

This is your current stand up show – or how would you describe it? Where has it taken you so far and where would you like to go next?

JD: I wouldn’t call it stand-up. Maybe stand-up theatre. It’s direct audience address, something I love about stand-up, but it has other theatrical elements that wouldn’t fly in a comedy club. This show has caught on for some reason and has had successful runs in Vancouver and has done festivals in Calgary, Victoria, Kingston and Toronto. There’s a lot of interest so it looks like it will keep going. It seems to have legs in the theatre world and as a performance element at Mental Health conference etc. It’s always a rush to do this show in front of psychiatrists.

You’re giving us a reason to pause and rethink the psychiatric system, what would you like to see change?

JD: I say in the show that I think psychiatry is good at interrupting a mind in crisis but not so good at helping us live the long after that follows a crisis. Or maybe even what it’s like to live a meaningful life between each crisis.

I don’t think we know much about the human brain and mental illness. The more I talk to other people; it seems like we all have are individual experiences with our moods and our thinking. Medication may be a part of that but we need to empower people to become aware of their emotional lives and thinking styles. Like this idea; Maybe it is possible to learn how you think and feel and know your limits and what happens when you get triggered and to still live a life taking calculated risks.

I mean for me, success looks different than before all this hit but I’m ok with that. I have a full and meaningful life; it just likely moves slower than some other people’s lives. I also feel that the psychiatric system is set up right now for crisis. I’d like to see it set up more preventatively. I mean, imagine every city has these fleets of tiny houses, and when you can tell you’re getting overwhelmed, instead of having to wait for things to get really out of hand and you need to show up at an emergency ward to save your life, you call the Tiny House Brigade. And then, no questions asked, a tiny house is yours for a few days of respite and all the pressure is taken off and your meals are provided and voila you catch up on sleep and time with friends, reset and are good to go. And this would be available to everyone; you wouldn’t need a diagnosis, just some awareness of being near to reaching your limits and asking for a break. No shame, no blame. Simplistic I know but not such a bad idea right? I mean, I think it’s something like a thousand bucks a day to keep someone in a hospital, so tiny houses, yes!

Also, in the play, I talk about starting the Fundamental Foundation, get it…Fund A Mental. And this foundation sees psychiatrists, naturopaths and therapists working together and the government will “fund a mental,” many mentals.  Also, I think we need to more honest that when medication works or helps that‘s awesome but, it doesn’t work for everyone. And blah blah blah, I could go on forever about this stuff but enough for now.

Would you consider yourself an introvert or an extrovert?

JD: I am not a big fan of binary definitions of any kind, you know those either/or questions. And in this case, as is often the case with me, I have experienced the extremes on this particular spectrum, as in a kind of manic extroversion, and I have spent time in a tiny bubble of introversion. Both these experiences are lovely for different reasons but unsustainable. Most days I move in and out of feeling extroverted or introverted. In acting, we learn to deliver lines outwardly, inwardly or neutrally. So, like a weird belly button, I guess I’m both an outty and an inny. When I am touring with a show, all the extroverted energy goes into the show. The rest of the day I’m a little shy flower, well, maybe a shy beetle, usually with my face in a book and politely keeping all interactions with people down while seeking out dogs.

Do you see a sea of naked people when you’re on stage? We keep hearing that’s something we should do if we’re nervous speaking in front of crowd.

JD: No. That would be so overstimulating for me. That said, I do like to see the people I’m performing in front of. In every show I’ve done, I build a way for the house lights to come up so I can see people’s eyes and maybe a smile or two. I also find the person (s) that looks the least happy to be there. You know, crossed arms and grimacing with what seems like bad gas. Sometimes I go back to that person to see if I get them to laugh or smile. Sometimes I go back to the person that was smiling to see if I still have them. But really, I have to stay on track and follow the rehearsed rhythms of the show. Don’t get me wrong, I like naked people but one or two at a time and not when I’m talking so much.

What tips would you have for us to get up in front of a crowd to speak?

JD: It seems counter-intuitive but if I’m nervous for some reason, I say to myself “Nothing to prove.” It seems to relax me and I’m more playful. Also, if you’re nervous, say you’re nervous. I don’t know really, what works for me, might not work for you.

Mental health, some would say, is not a laughing matter. What would you want to say to them?

JD: I’d not say that’s not my experience.

What was the last thing that made you LOL?

JD: A friend sent me a link to this little kid who calls himself the Shirley Temple King. He reviews the non-Alcoholic drink called Shirley temple. I don’t know, he’s hilarious. And today, I heard Maria Bamford being interviewed on Q and that was awesome. Oh, and last night I was watching an NBA game and The Sacramento Kings have Jerseys that say Sac Town on the front. Sac Town? Nobody caught that? That made me laugh.

Why should we check out your upcoming show at the Progress Festival?

JD: Because you want to see a well-crafted trauma narrative with an engaging and semi-handsome performer who might also make you laugh. And/or you want all that, and you want to leave and have a good conversation about what sanity and insanity is or isn’t with your friends. Or, you want to be so glad not to be me that your life seems freaking awesome!

Certified is written and performed by Jan Derbyshire. Curated and presented by Why Not Theatre.

ABOUT THE PROGRESS FESTIVAL:

The fifth edition of Progress, an international festival of performance and ideas. The Festival brings together a dynamic group of curatorial companies and progressive performance work from across the globe that is urgent and reflective of contemporary approaches to form.  The curation of Progress 2020 is rooted in interrogations of class structure, economic collapse, and climate crisis – dovetailing into explorations of inheritance and how we might navigate what we have been handed.

Tickets for Progress (single and 3 show pass) are now on sale and available at www.progressfestival.org or by calling The Theatre Centre box office at 416-538-0988. Several presentations also offer Pay-What-You-Can Afford pricing.