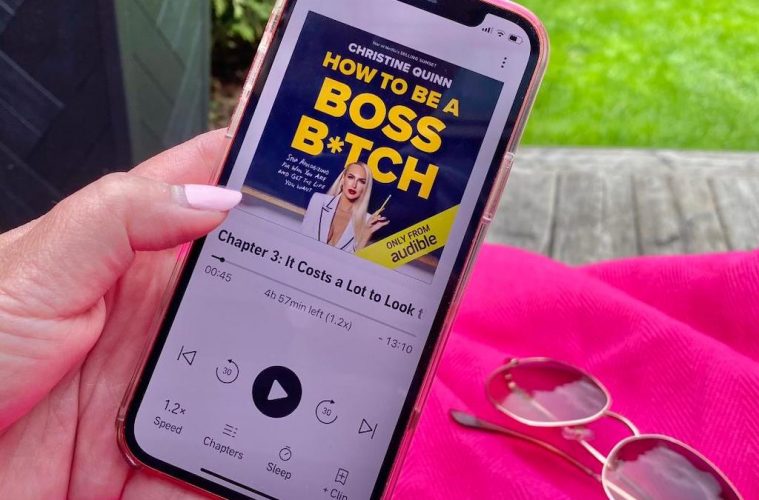 Christine Quinn is Okay With Being an Unapologetic B*tch

If you’ve been soaking in the epic California views on the smash hit Netflix show Selling Sunset then you are more than familiar with the multi-million dollar house listings…and all the drama and of course, epic wardrobes. The one character that seems to be in the eye of every storm is Christine Quinn. No, wait…she is the creator of all the storms. At least that’s what we are led to believe.

Remember, there are two sides to every story and she offers her POV in her recent book, How to be a Boss B*tch: Stop Apologizing for Who You Are and Get The Life You Want. But it’s way more than spilling tea about the show!

Curious? I certainly was. I am always interested in learning about all sides of the story. Mmmm, okay, and I’ve been ALL IN with this Netflix series right from the start.

There’s a lot about Quinn that people love to hate on and I can go on and on about what’s more than meets the eye. That goes for all the characters. I mean, did you really think Chrishell was that into Jason? Come on!  There was no chemistry from her side.

And now she’s with gflip? Say, what? No, I’m not question her sexual preferences. I don’t care who she loves, but I wonder how authentic she is? Time will tell. I know I’m not the only one wondering and who  isn’t totally convince her latest love interest isn’t for show. She IS an actor first. That’s for another post. But we are here to talk about Christine Quinn’s book!

In Quinn’s book,  you can sense how disappointed she was with how she’s been portrayed in the show. Yes, she admits she can be a bitch but she owns it. That is, if you mean someone who works her ass off, stuffs 20% of every pay check into savings and not just in her La Perla bras. The girl can pay her own bills and still buy the Balenciaga bag of her dreams. Hellz yeah, THAT bitch. She offers a quick and easily digestible reminder to invest in your future and not expect anyone else to pave your yellow brick road.This bit of advice was a surprisingly smart one that many should pay attention to.

By the way, “bitch” is not a bad word in her books but what she quickly learned while being casted on this show is her character is pegged as the villain and continues to be in the latest season.  We can agree that if she gets cut out of the show, there’s really not much else that keeps the cauldron bubbling.

“If you’re going to call me a bitch, I’m going to take it as a compliment. Bitch is just a name people give you when they don’t know what to do with you.” ~ Christine Quinn

How to be a Boss B*tch is part memoir, tell all, and guide to embracing your inner bitch and surprisingly filled with great advice.  Whoa! Yes I did say that. I downloaded the audiobook version through audible.ca as soon as it was released and took it in, twice.

The book starts with a personal story that Quinn shares publicly for the first time. I won’t give it away but let’s just say that she was not born with a silver spoon or Louboutins on her feet. She was far from the Rodeo Drive spending account but that didn’t mean she didn’t have to work hard to keep her eyes set on the prize.

While she opened up about her rough upbringing by no means was she looking for a pity party. She explains she’s sharing so others can get past their own obstacles and turn them into fuel for the future.

“I want you to see no matter how tough things were for me, I found ways to keep going and more importantly how to own that shit.” ~Christine Quinn

As an actress, real estate agent, perfume and make up mogul, brand ambassador for companies like Samsung and ShoeDazzle, a wife and mother, her story comes straight from her with hopes to light a fire under our bellies.

In her true style, she balances this read with her power-bitch mindset and her wicked sense of humour. Like in the show, she has a way of lightening up some of the most serious points. How many time did we hear her say “come on! that’s funny!”  on Selling Sunset? 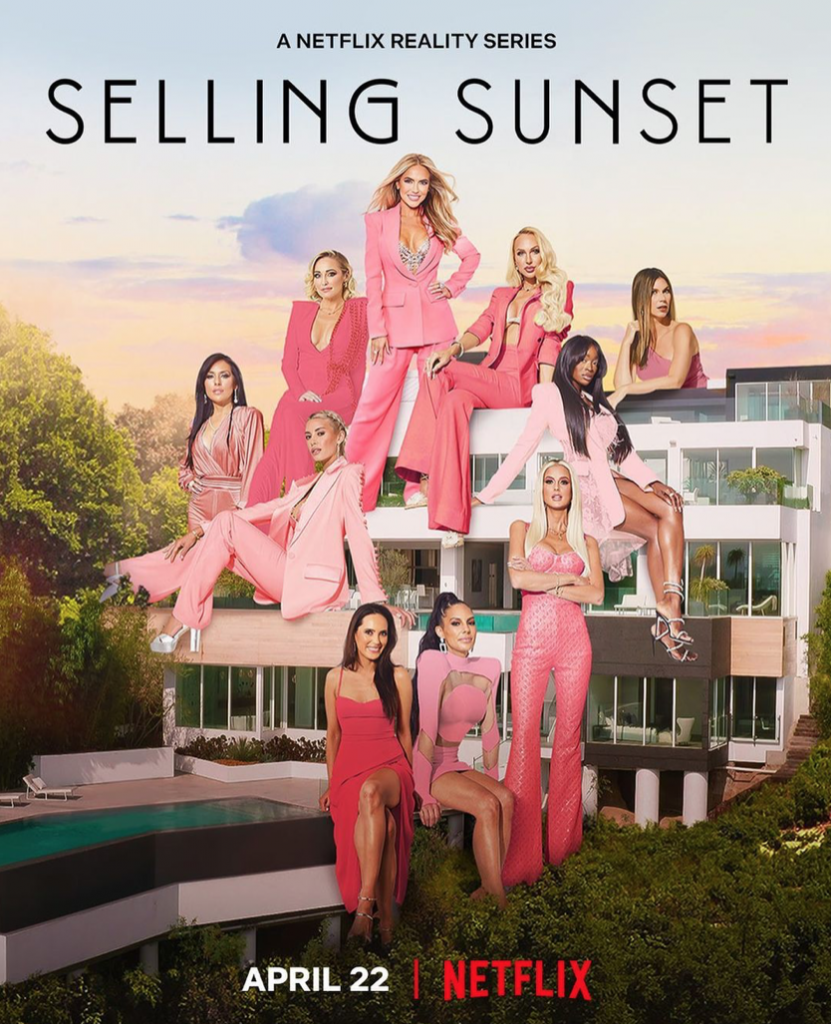 I laughed when she shared her “sugar daddy” stories calling the experiences part of her “investment”. Yes, she’s got that Barbie persona with sky-high legs, being super skinny, blond with blue eyes and knows how to work it. She’s got that ’90s trophy wife vibes but did we even consider the struggles that image brings?

I know, no tears will be shed for her but it did have me pause and think about just how average she might have felt in a land where this flawless look is the norm. So, how does she make herself stand out from the crowd? She explains that we all need to find ways to be unforgettable. That’s the key. She had been in auditions where she was told she was too much of this or not enough of that. She was relegated to auditioning for roles that you can pretty much count on one hand. Prove that you’re different. Tenacity and sass? Work it.

Quinn then turned to focus her career in real estate and discovered she was good at it. Really good. But performing and entertaining were her passion. In telling her story, she believed she had the chops to land roles beyond the limited set of characters she was told she should go for. Eventually she realized she had to come up with her own character and the one she wanted to play the most? It was herself.

While she worked with the Oppenheim Group she spoke about the glamorous billboards on Sunset Blvd. that featured the attractive team of real estate agents. It sparked the idea for the reality show as Adam DiVillo, the television producer of the MTV hit series The Hills, drove past it one day. He approached the agency’s founders and brothers Jason and Brett to create the show. Now five seasons after that fateful meeting and with over 3 million Instagram followers, Quinn says she’s living her manifested dream come true.

“A lot of people mistook my character for the real Christine Quinn, and they still do, but then I realized, so what? You can’t make everybody happy all the time. So, you might as well focus on making yourself happy. That’s all you can control.” ~ Christine Quinn

She tells readers that she spent her energy “playing the game” to make binge-worthy drama for Netflix. She reminds us that Selling Sunset is a show that is meant to entertain. What you see on screen doesn’t necessarily reflect reality. But damn she’s convincing, right? (Waiting to hear what others cast members have to say to this). With overnight fame came the next level collaborations with high fashion labels and beauty product lines. Not just for her but also for others.  Can we just assume that every brand you see on the show is there with intent?

Quinn’s book includes some practical tips to apply to our daily lives. You didn’t think it was her full recipe to life just by reading, did you? She wants us to take a moment to reflect and apply thought into our lives.  Becoming a boss bitch is a mindset that requires us all to do something. “Change your outlook and the more you’ll see your life change,” she tell us.  By the way, she also explains there is more than one type of boss bitch. Here, she identifies the different traits. Yep, we don’t have to mimic her exact actions to be successful in our own lives. This is merely a gateway to understanding what each of us want in life.

Just remember, “nothing is permanent… As much as you think people might care about you and your business, no one is writing your life story in magic marker. They care way too much about themselves than your side of the fence,” said Quinn.

Quinn also wants us to embrace our inner bitch — feel this, be it, and act on it. Her motivation for this book is to drive transformation. It’s not about actually being her clone.  She tells her story so others can write their own.

She mentions that women like Paris Hilton and Khloe Kardashian are people she admires. Quinn reminds us that while Hilton may come across as a spaced-out blonde, she also owns multiple businesses and knows how to work her persona to her advantage.

Confidence is key as this book serves as a kick-ass of a reminder. Confidence is one of the most attractive traits we hold. I hear it often from men and women.  When we have the confidence in our voice and in our body language, it changes everything.

To be honest, it’s not an easy space to be in as a middle-aged, short Asian female who’s far from the blonde ambition. But I know there’s a huge difference when I feel confident in my breath and step. I feel stronger and people around me treat me differently.

I can very easily retreat back to being that wallflower that gets overlooked but I’m learning to take a step back and remind myself of what truly matters to me, not to anyone else. I agree with Quinn about how we need to support and lift each other. Especially women. We all hustle in our own way and we need to stop the comparison and forge our successes whatever that may be and whatever it takes. Legally of course.

Quinn’s book is filled with great quotes worthy to save on your iPhone for those times you may need a self care boost. That’s what I’ve done. I’ve taken some of her “boss bitch” advice and blended them with my own beliefs to get past any daily struggles.

“Own your style. Make bank. And never be afraid to speak your mind.” ~ Christie Quinn 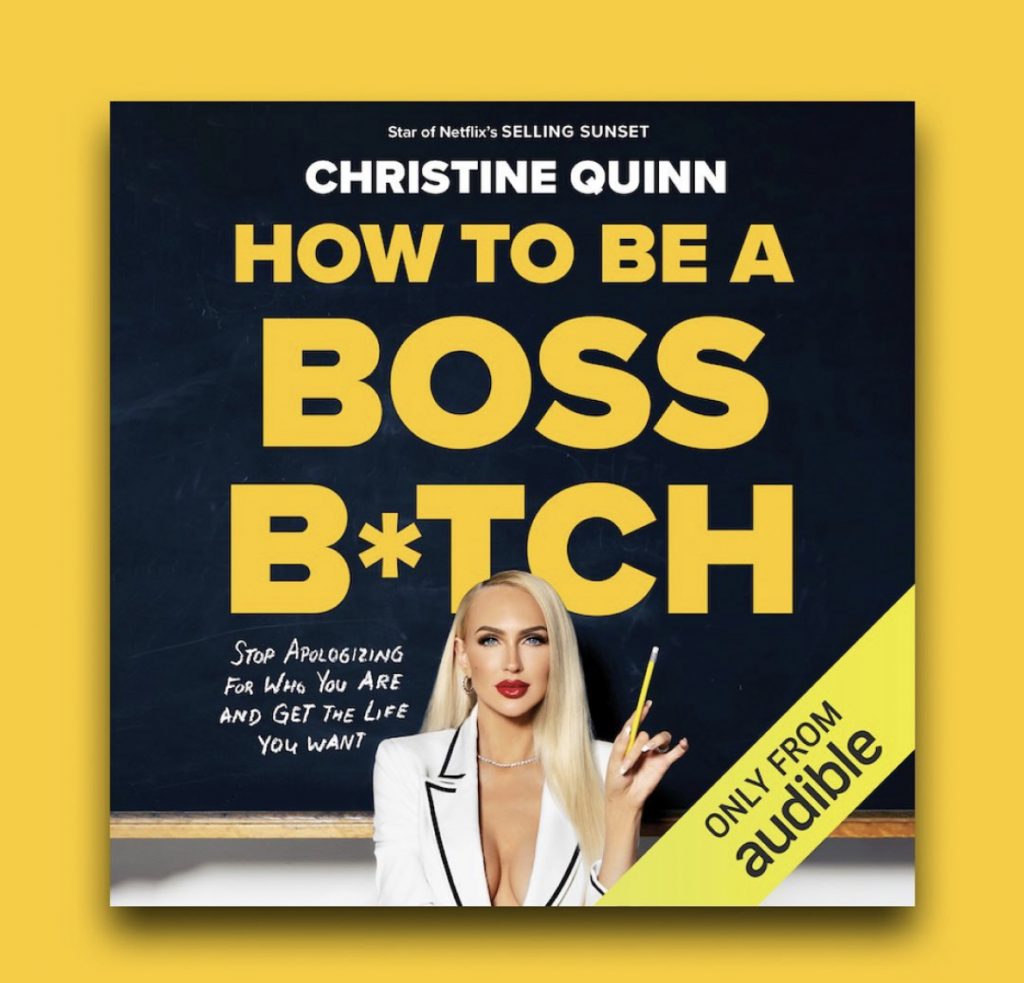 How to be a Boss B*tch by Christine Quinn can be downloaded with an audible.ca membership.

Here’s an exclusive interview with audible to check out as well.

By the way, Chrishell’s book is now also on audible.ca  — that’s next.