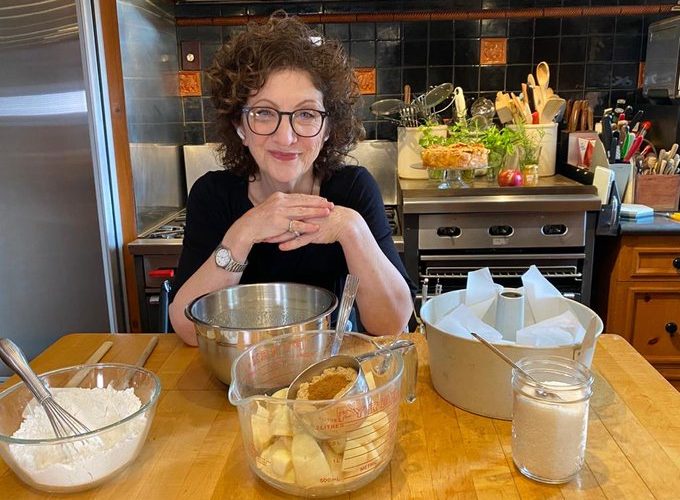 Bonnie Stern should have been a librarian. Studying English, she obtained a degree from the University of Toronto in the early 1970s, her love of reading and literature had her pegged for a life of academia until cooking came along. Taking a ‘gap year’ before the term really existed, Bonnie found herself enrolled at George Brown College in the food management course, putting her plans of a Masters in English on hold. Her parents were not thrilled.

“My parents were still really upset, I had graduated university and now going to community college. That was unheard of back then. The food program at GBC was only a few years old. There was no big food business in Toronto. There was only a handful of good restaurants in the city at the time. I really felt like I was learning something, I had a passion for it.”

So, it was by following her interests (and upsetting her parents) that Bonnie carved her culinary career path. First came cooking demos, which helped her find her voice, “I’m really painfully shy, but I felt like I had something to offer, I really pushed myself to teach people how to cook. I was that shy. But I became very outspoken, talking about food, at a time people when people weren’t really excited about it,” offers Bonnie.

That led to opening her celebrated cooking school in North Toronto in 1973, where she encouraged her students to learn a skill or two – no matter the meal, creativity and problem solving came into the fold and Bonnie would help families adopt an easy-going attitude towards breaking bread. As a mother of two herself, she understood the importance of nurturing positive relationships with food, even if sometimes she read her own room wrong.

“My son wanted a peanut butter sandwich every day for lunch. Every single day. By grade two, I had had it. I decided to make him a cheese sandwich instead, he likes the Kraft cheese slices, the bread, it’ll be nice to have something different. But of course, he came home, and he put his hands on his little hips and stood there and said – Mom, when I want a change I’ll ask for it. School is so hard, I want a lunch I can depend on! I thought oh my God! Your kids teach you so much!!”

While she may not be packing her kids lunches anymore, meals are often a reason to gather. Even during COVID lockdowns, Zoom was the medium and Bonnie served up the message, often doing deliveries to her family so Friday Night rituals remained intact. Her two children, now grown up and not demanding sandwiches anymore are still very much in the picture, in fact, Bonnie says they’re her favourite cooks, next to Ottolenghi (no pressure). Her daughter is also co-writing and helping to create Bonnie’s latest cookbook, set to come out next year titled: “Don’t Worry, Just Cook,” which they began writing during the pandemic. Bonnie maintains cooking isn’t that hard, just get into your kitchen, and cook something that will instil confidence, even if that’s a meal kit delivered to your door. “Cooking food is a life skill, one worth teaching your children too, and the pandemic really highlighted that for some.”

With twelve published cookbooks under her belt, the recent nod from Taste Canada into Canada’s Hall of Fame shouldn’t have come as a surprise, but Bonnie certainly wasn’t expecting it, in fact, she was downright stunned. She says its an absolute honour to gain this recognition for a career that almost didn’t come to be.

Follow Bonnie on Instagram to stay up to date on her newest recipes and cookbook launches. Missed our most recent #LadiesFirst? Catch up with Vanessa from Aphrodite Cooks here. And stay tuned for our next women in business profile on Lisa from Le Dolci.

Interview may have been edited for length/clarity. All images courtesy Bonnie Stern.