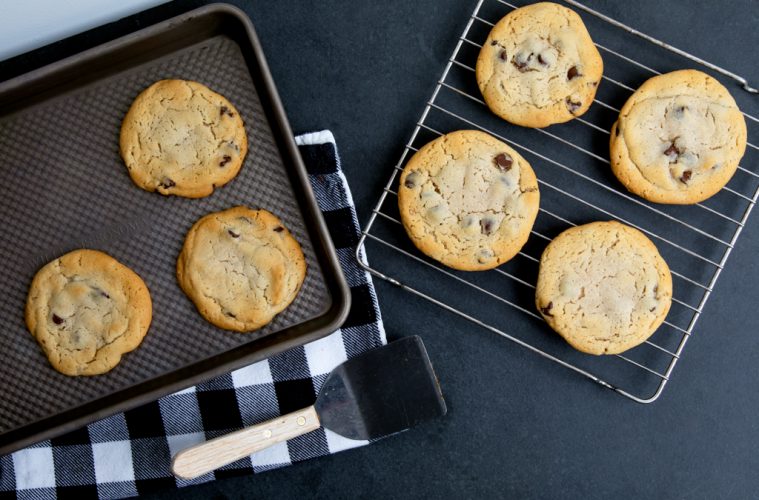 There’s a burning question I’ve been mulling over in my kitchen for way too long. Since I was a child, barely seeing over the counters I was a baker. More specifically, I was a butter baker. There were no alternatives, no swapping out for margarine. My grandmother didn’t mess around with anything but the originals, recipe cards with asterisks and names of where they were amassed overflowed in her tidy indexed and catalogued card box. She inspired me to bake, as did my maternal grandmother, who was a little more creative and free with her chocolate chips. And now plant-based butter has entered the chat.

Now, baking for my bunch, I’ve collected a few recipes my family treasures. But with diets and preferences changing, I wanted to investigate some other options and discovered a few interesting replacements to go toe to toe versus everyone’s go-to greaser.

Using President’s Choice new Basic Cookie Dough recipe, created by the PC Test Kitchen, I baked six versions, each identical*, except for the butter substitution. PC’s version calls for the classic grandmother approved butter version, the stalwart favourite of many bakers, but does it still hold up? After a lengthy investigative report from my pal Julie over at Globe & Mail, butter just ain’t what it used to be. With a myriad of impressive alternatives, I grabbed my wooden spoon and got to work.

*canola oil cookies requires slightly less oil, when baking with oils you decrease the amount slightly. Refer to this conversion chart for the math.

🍪 Each dough rested in the fridge for 36 hours

🍪 Each dough was baked on the same exact cookie sheet

🍪 Each dough was baked in the same degree oven, on the same rack

🍪 Each dough was cooled on a cooling rack

There’s a lot of science to ensure each dough and cookie would be as identical as possible. Can you measure love?

Which Cookie Will Take the Crown? Meet the Contestants

PC Plant-Based– This coconut and vegetable oil-based butter alternative is meant to substitute effortlessly. The look, especially that classic butter curl is achieved here. The dough resembles real butter. It’s easy to work with and creams like the real thing. Even smells nice (yeah, I sniff my dough).

Earth’s Own Dairy Free Butter Spread– Organic, Non-GMO, No Soy, No Nuts, No problem. This vegan-friendly spread consists of a plant base (butter beans) with coconut and sunflower oils, which resulted in a standard looking dough that was really sticky and clung to the spoon. Slightly trickier to work with when pulling off the clingwrap, but it still worked.

Lactancia Unsalted Butter– 100% pure pasteurized cream, sourced from Canadian farms. I picture a cow grazing while writing this, but we know the dirty dairy truth, thanks to Julie (above) palm oils have entered the chat, and well of course you are what you eat. Mooove it along.

Canola Oil– Canola! Canada’s oil brings Omega 3&6 to the mix, and a colour departure I wasn’t prepared for. Using a smaller amount of oil (as per the canola bible) these cookies were almost runny, but I went with it, it’s science folks. The dough was dense and heavy, and not surprisingly did not stick to the clingwrap, or counter, or anything. It is oil after all!

C is for Cookie, But is it Good Enough For Me?

Crispy? Chewy? Crunchy? Personally, a good cookie should offer a trifecta of the three, a brittle border, just slightly crunchy and crispy, before a soft and forgiving middle. Kind of like my personality at first glance. But, it’s a personal approach and one that should be carefully considered – what is your desired outcome? While this particular recipe lends itself to any and all of the above, many other recipes require a replication, a cookie clone of the original.

With 6 x 30 cookies cooling on my countertop, it was a blind taste test for anyone who stumbled into my flour-filled snowglobe of a kitchen. While I meticulously labelled and photographed each batch, I already suspected the winner was obvious- perfectly uniform shape, a dense but slightly cracked surface, a perfect beige colour with a slight intensification of colour at the edges. Beautiful!

To a seasoned pro like myself, there were some very subtle markers in the taste category; Butter does amplify the creamy texture sought after in a classic cookie dough, but when baked resulted in a too-brown-too-crispy cookie- even though they’re all measured and timed, butter browns too quickly with adverse effects.

The opposite is true for Canola, where the cookies were moist, almost flaccid, clearly baking times could have been adjusted for a crispier outcome. Earth’s Own Dairy Free Butter spread had a cake-ier outcome, not altogether wrong or bad, just probably a better replacement for brownies or bars instead of delicate cookies.

PC Plant-Based Butter was the most butter-like, if you’re looking for a product that can also do double-duty for your breakfast toast, this is the closest in appearance and taste. The cookies also look similar to butter-based cookies, a little browner and a little flatter than my preference.

Down to the final contenders, and it’s getting close, Becel’s Plant-Based and the Crisco versions offer similar textures and the colour is too close to call. But the deciding factor is always taste, and Crisco, laden with fat and completely neutral in taste takes the cake and the crown. Palm oil is present but maybe that’s the key to these cookies, they stay fresher longer, soft and chewy in the centre even days later.