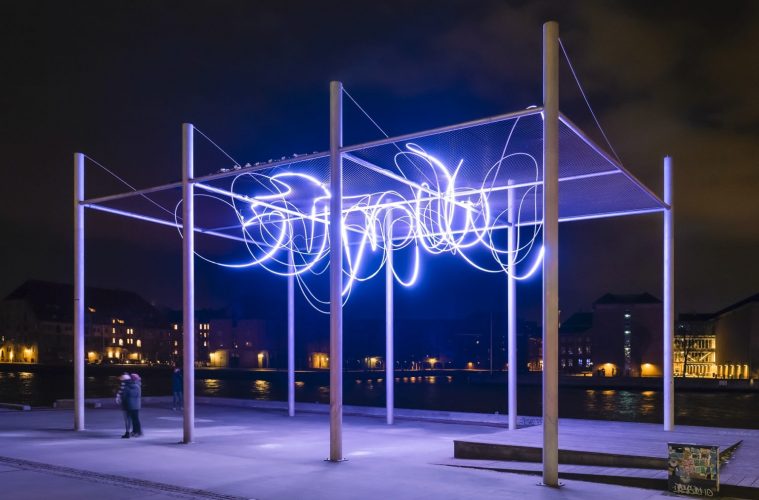 Best of what to see and do in Toronto this February

We’re  starting to come out of our bubbles as pandemic restrictions are easing up again this month. Restaurants, galleries, museums, and other venues will be allowed to move back to 50% capacity as of January 31. So, what’s opening back up this month?

And if things go according to plan, more restrictions will continue to be lifted after this date!

So, with that little golden carrot dangling in front of our eager eyes, here are some things worth checking out. Do keep in mind, of course, that indoor public spaces will require proof of vaccinations AND wearing of masks. I’ve also included some events that are offering hybrid or continuing online.

NORDIC LIGHTS at the Harbourfront Centre:

now open until February 13 in-person. Six interactive light artworks from artists from Canada, Norway, Sweden, Finland, and Denmark will illuminate the night skies from 5pm to 10pm. The installations will be positioned at different locations along the Harbourfront Centre Campus, turning the 53,000-square-foot space on the waterfront into an open-air gallery. What could be a better, naturally Covid-safe collective art experience? 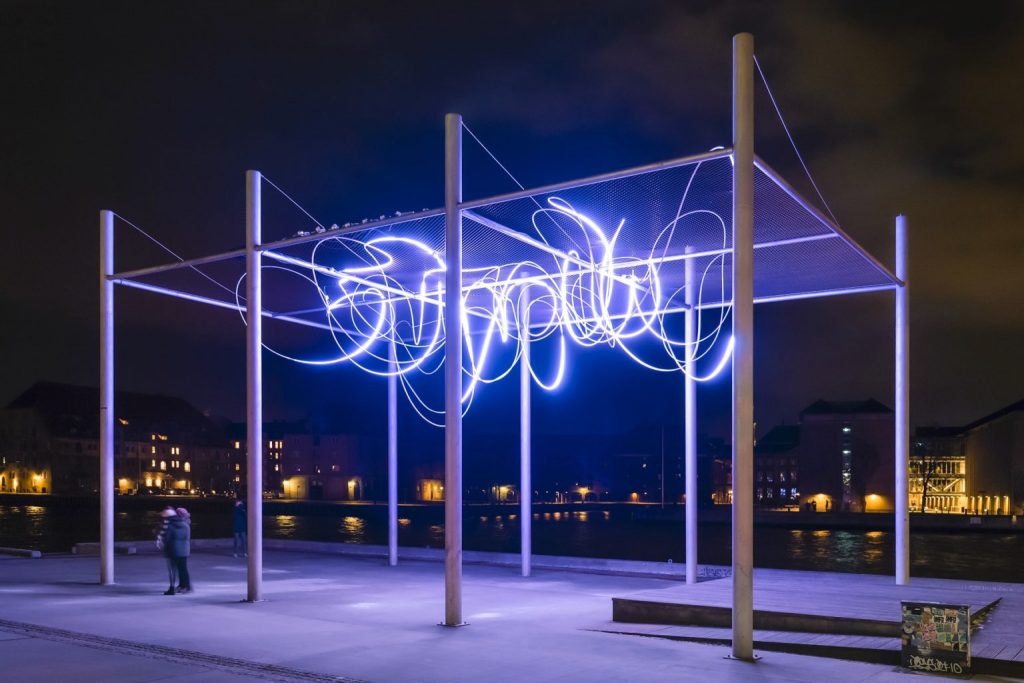 Black Creek Pioneer Village February 4 to 27. Visit this 1.8 km outdoor trail and see the light, snow and ice show filled with ice carvings. There are also  life size snow globes, and more, all synchronized to music. Walk through or there’s a drive-thru option. *Dog friendly event. Tickets available online. Portion of the ticket sales will be donated to Epilepsy Toronto.

The ROM officially reopens on February 2 and are excited to welcome everyone back. But we’ve also marked our calendars for the new Hike The ROM program. Launching February 16 at the Royal Ontario Museum, escape the cold and take a hike indoors! Two indoor ROM Trails of different lengths “Walk the Wild Side” and “Eternal Life” will help you reach your step goals while you take in an engaging journey of discovery through the permanent galleries.

FAMILY DAY at the ROM:

Enjoy this extended weekend schedule that includes Monday, February 21 (Family Day) with four special exhibitions on view. In addition, there’s a brand new gallery on early life and special weekend activities for the entire family. Be sure to check out the Great Whales: Up Close and Personal exhibition. It includes three real whale skeletons including the Sperm Whale, the Blue Whale and the North Atlantic Right Whale. 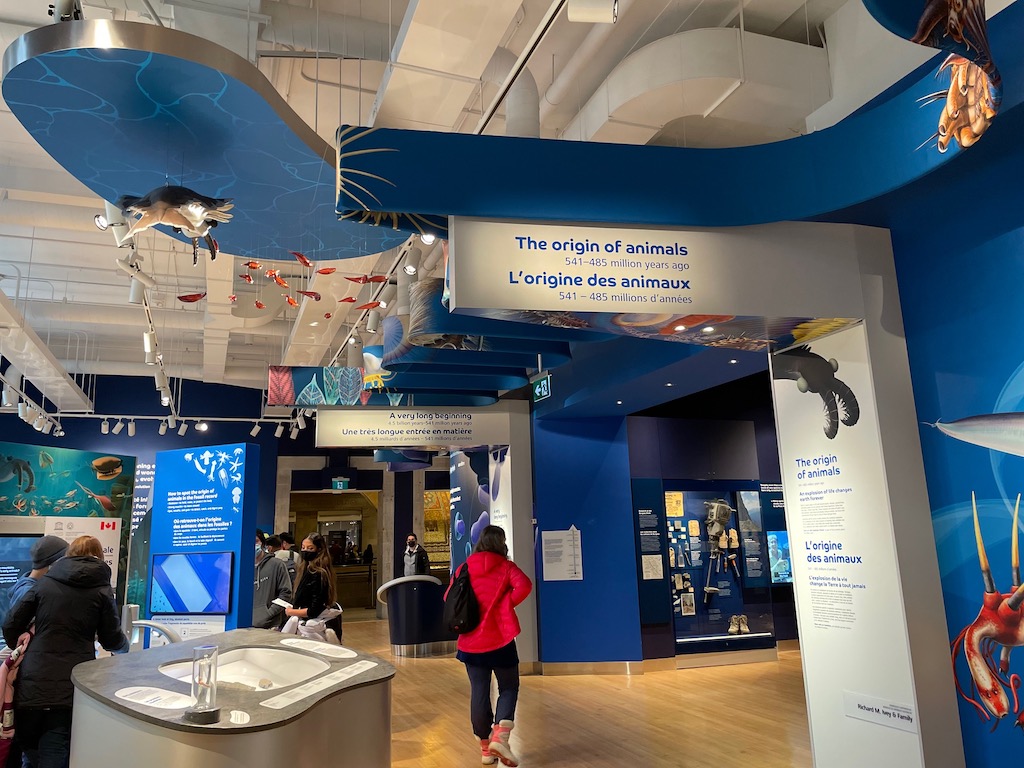 Toronto Railway Museum presents Trains in the Movies: Behind the Scenes of Iron Road

on February 17 at 7 pm (online lecture, free): Iron Road is an epic, action packed movie about the building of the Canadian Pacific Railway’s transcontinental railway told through a taboo love story.

Film producer Anne Tait will take you behind the scenes. She will share over 60 rare, on-location photos, tell the exciting story of making the movie, and answer viewer questions.  *The film can be viewed now for free on CBC Gem. Lecture is free but you must register a spot.

conducted by Lucas Waldin, February 12 at 7:30 pm. It’s the music you love, with the one you love! Bring your music loving friends to the Roy Thomson Hall for a night of TSO serenades as they perform some of the most romantic songs from musical theatre and film. Pretty certain  “My Heart Will Go On” from the Titanic and a few songs from The Phantom of the Opera will make it on the playlist for the night. Visit their site for other concerts as we continue to look towards spring. 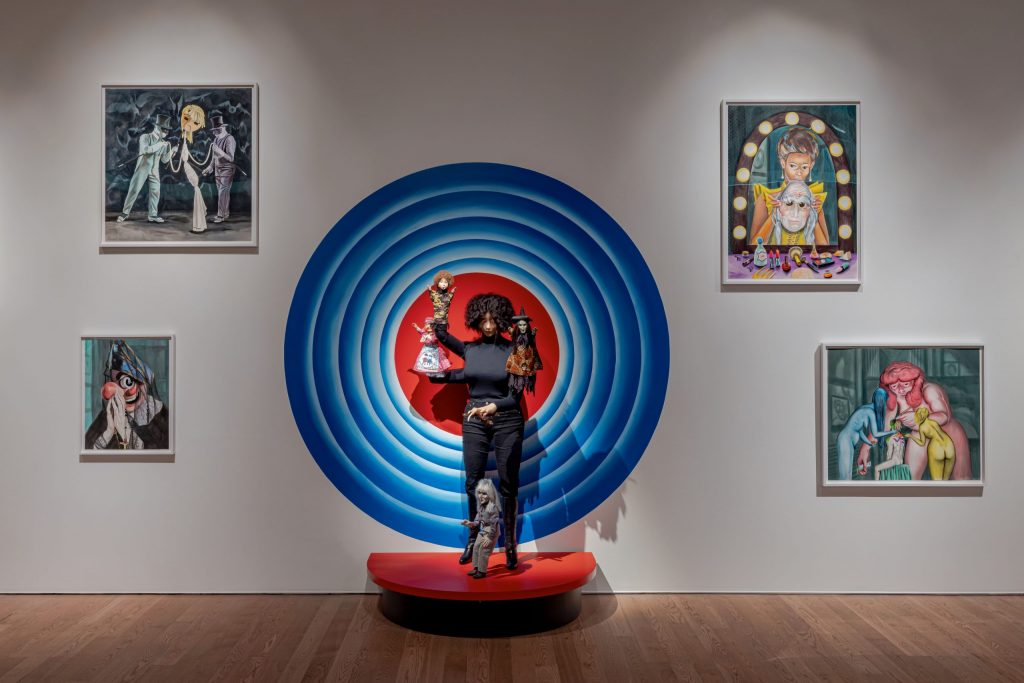 Shary Boyle: Outside the Palace of Me at the Gardiner Museum:

Opens February 24. This exhibition by this renowned Canadian artist centres on the notion of “selfie culture”. It’s the idea that we’re always presenting a performance of ourselves. It asks visitors to question how we see ourselves an each other.  iInterrogating colonialism, misogyny, racism and other societal pressures, all from a place of empathy. Shary transforms the exhibition hall into a strong and captivating universe, parts theatre, carnival and art museum. Truly a unique experience. The Gardiner Museum is now open.

Follow the clues through time from the first modern detective story in 1841 to the robot detectives of the far future. Whether amateur or professional, human, non-human, or anything in between, these detectives are on the case. Discover the magical, supernatural or bizarre mysteries of speculative fiction. Solve them alongside detectives like Harry Dresden, Batman and Sherlock Holmes.

From popular, modern series to lesser-known works, there is a lot to explore. Find out more at Cracking the Case: Sleuths in Speculative Fiction at the Merril Collection. Free Exhibit. The exhibit can be viewed during the Merril Collection’s open hours: Monday-Friday 10am-6pm, Saturday 9am-5pm, closed on Sunday.

February 11 and 12. You may have heard of White’s in-person séances and mind reading events that sell out faster than you can say BOO. Here’s another chance this month to bring back the wonder and curiosity …maybe even some shock but definitely a lot of awe! Limited number of spots available. The live event will take place via Zoom. You won’t want to miss it.

Also on our radar is the feature length documentary With Wonder, by filmmaker Sharon Lewis. It’s is about the LGBTQI+ Christian community and their attempts to answer the question: Can you be both Christian and Queer? The film is  described “a love letter to God from the LGBTQI+ community of colour.”

Art Gallery of Ontario (Final weeks of exhibition, closing February 21) Visitors will experience the multiple ways of encountering the Caribbean and its diaspora, from the period following emancipation through today. This is the first exhibition organized by the AGO’s new Department of Arts of Global Africa and the Diaspora. It will blend historical and contemporary narratives, presenting more than 200 photographs from the AGO’s Montgomery Collection of Caribbean Photographs.  Paintings, sculpture, and video works by modern and contemporary Caribbean artists are featured as well. They all show how the region’s histories are constantly revisited and reimagined through artistic production over time. 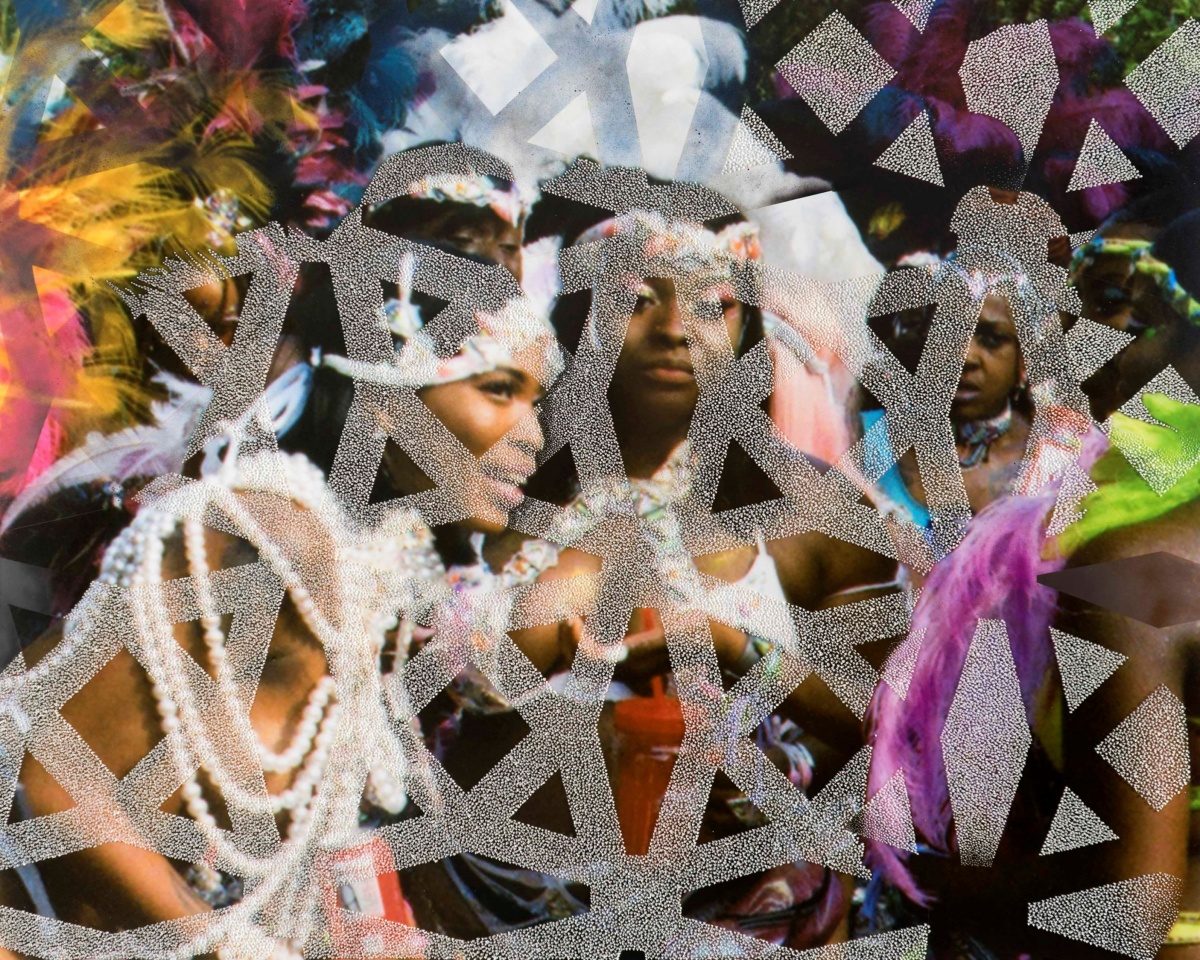 Black Light: A Celebration of Canadian Filmmakers with Hot Docs:

On our radar is Tamara Mariam Dawit’s Finding Sally story that pieces together the life of a woman lost to a period of violence and oppression in late 70s Ethiopia. Also, watch for Sylvia D. Hamilton and Clair Preisto’s Black Mother Black Daughter that explores the lives, experiences and contributions of Black women in Nova Scotia. Full schedule can be found at hotdocs.ca

Hosted by The TPL Culture (live and online) join in to listen to this author discuss her innovative and intimate memoir, I Am Because We Are.  It  tells the story of her mother, a pan-African hero who faced down misogyny and battled corruption in Nigeria.

In conversation with Negin Sairafi. Inspired by the African philosophy of Ubuntu — the importance of community over the individual. Outraged by injustice, Dora Akunyili took on fraudulent drug manufacturers whose products killed millions, including her sister.

A woman in a man’s world, she was elected and became a cabinet minister.  Nevertheless, she had to deal with political manoeuvrings, death threats, and an assassination attempt for defending the voiceless. She suffered for it, as did her marriage and her six children.

I Am Because We Are illuminates the role of kinship, family, and the individual’s place in society.  Revealing a life of courage, how community shaped it, and the web of humanity that binds us all.

In conversation with Habiba Cooper Diallo:

hosted by TPL Culture February 25, (live and online). #BlackInSchool is Habiba Cooper Diallo’s high school journal, in which she documents, processes, and resists the systemic racism, microaggressions, stereotypes. She opens up about the outright racism she experienced while being Black in school in Canada.

Habiba Cooper Diallo is currently pursuing her masters degree in public health and is a fierce advocate and activist in support of women’s maternal health. But as a teenager attending high-school in Canada, she was another young Black woman facing structural anti-Black racism in our public education system. #BlackInSchool is Habiba’s eye-opening account of how our schools reinforce rather than erode racism. Habiba Cooper Diallo shares her new book #BlackInSchool with host Dr. Funke Oba and discusses how our institutions work to erase the lived experiences of Black youth and try to erase Black youth themselves. 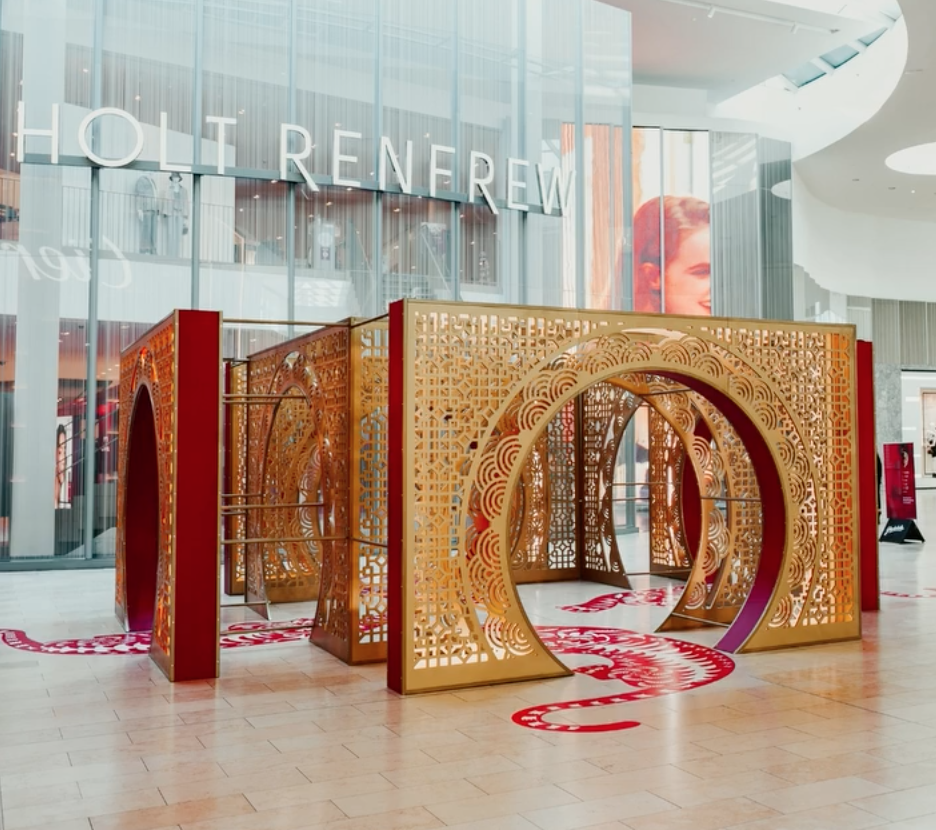 Check out the beautiful Lunar New Year Art Installation (in front of Holt Renfrew) until February 11. Designed by La Camaraderie and produced by MASSIVart this immersive installation invites visitors to celebrate through symbolic action — crossing the gate to the New Year. The immersive portal, inspired by the Tiger — it’s energy and strength. While you’re at the mall visit Balenciaga’s in-store promotion with a graffiti artist to create personalized drip paint art on small leather goods. Burberry will have calligraphy animation the weekend of January 28-30.

Will host a LIVE Lion Dance on February 5 for 12 pm to 3 pm at Chinatown Centre. There will also be a virtual event (check their Facebook page for LIVE information) on the same day including food demonstrations, Shaolin kung fu demonstrations and more. If you’re visiting the area also check out several at installations: the Yue Moon: Tiger with Wings Exhibition (519 Dundas Street West) by artists PUFF Paddy and Meegan Lim — on display until February 28. The Flow of the Tiger Project by artist Justine Wong and Nam from MakeShift Collective can be viewed at Dragon City Mall.