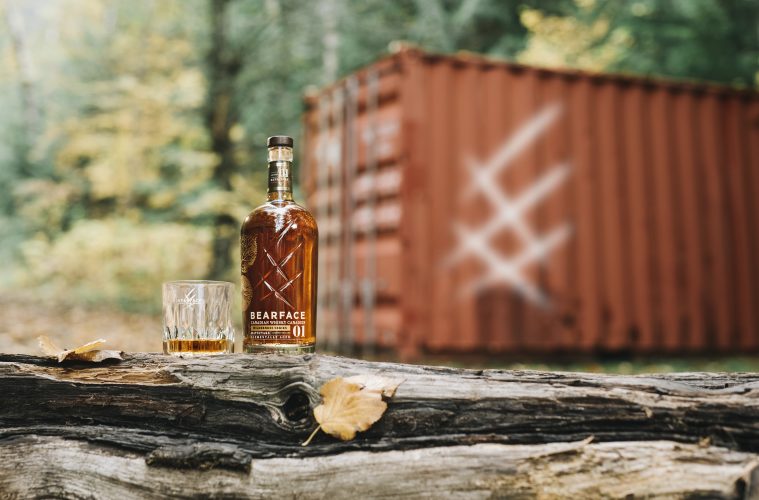 Bearface Matsutake Whisky Is a Stunner

One of the great joys of writing about spirits and cocktails is the chance to speak with the makers behind the brands, and it was such a pleasure to speak to Andres Faustinelli, Master Blender at Bearface Whisky. The occasion was the release of Bearface Whisky’s new limited release Matsutake, the first in their Wilderness Series. It is made with wild foraged Matsutake mushrooms, harvested from the Kootenay mountains in British Columbia.

Andres explained that he was traveling between the US and Canada for work in 2020, and when he came to Canada, he had to quarantine for two weeks. He went stir crazy and hatched a plan for his release day:

After two weeks, I was desperate, and the weather was spectacular. It was late September, and Mission Hill had a helicopter available. I said, “Can you take me one day to a mountain and drop me up there?”  And they said yes! So I took two foragers with me, and I took the helicopter, and we were foraging on the way down and taking samples of every ingredient we could find.  And I was just dying to infuse all of these different things with high proof whiskey.  And I came across the matsutake, which were in season, and it was a complete revelation.

What I love about this origin story is the element of chance. This is not a whisky made to fit a brief, or a consumer trend or a predetermined idea. It was chance that put the mushrooms into the whisky, and the origin story is, quite literally, organic.

The mushrooms also root the whisky in place. They are cleaned right on the mountainside and immediately put into an enormous tea-bag and dropped into a container of high-proof whiskey. As they infused, Andres was surprised to discover that they released their water and lowered the ABV of the whisky. You are drinking water from the earth and air of the Kootenays as you drink this whisky, another fortunate accident in the process that adds to the unique character of this whisky.

Chance may have been behind the magic ingredient, but Canada is the perfect home for this discovery because Canada has the most flexible whisky regulation and blending rules in the world.  In Canada, ten parts of whisky can be blended with one part of another spirit.  Andres revels in this freedom, and he took full advantage of this rule with his One Eleven Oaxaca Agave Spirit, a whisky blended with mezcal.

In this iteration, he continues to put Canada on the map of innovative whisky blending.  The mushroom-infused whisky joins the two other main components that make this blend distinct: whiskey aged in ex-sherry casks and in ex-wine casks. Each cask imparts its own flavour. The wine casks give the whisky a wine-forward, dry fruit character. The sherry casks form the bridge between the wine cask-aged whisky and the whisky infused with the mushrooms. Sherry casks impart a savory taste that speaks to the umami character of the mushrooms. Andres explains,

In every blend there is a bridge between the different components.  The bridge component was the amontillado sherry cask because it is more funky, more umami, more savory than the other sherries.  You get a component from nature coming into contact with something very, very old and coming from very far away. It is that savory kick that is really important.

So how does this magic happen?

Part of the secret to the brand’s taste is that the whiskey is “elementally aged.” The whisky casks are matured in a shipping container, exposed to the elements in the wilderness, and left to the extremes of heat and cold. This is another way in which to let the time and place leave their mark on the whisky.

No. This is not a mushroom-flavoured drink. The job of the mushrooms is to give the whisky their umami character, and their presence is subtle but remarkable. This is a very rounded, smooth, sherry-forward whisky. It has the spiciness of cinnamon and nutmeg, the earthiness of the forest floor, and the sweetness of dried fruits and of marzipan. It’s heavenly.

I often joke that my favourite way to enjoy whisky is to sit next to my husband while he drinks it. I love the smoky aroma, but most whiskies are too medicinal for me. Not Bearface. This blend is a stunner, and I have enjoyed a dram many times since opening the bottle. It’s smooth and highly drinkable straight, even for a non-whisky drinker like myself.

I must also give a shout out to the bottle design. The bottle is engraved with what look like both claw marks and the traditional etching on crystal glasses. This beautifully captures the elemental nature of its origins and its sophisticated taste. I’m not usually swayed by a bottle design, but this one stands out for its harmony with what’s inside.

This whisky is so smooth and its taste so delicate, that I asked if it was created with the intention of being served straight. No, was the answer. Andres suggested using it to make a Manhattan, but using a cream sherry instead of vermouth, a fantastic way to play up the characteristics from the sherry cask aging.

Bearface Wilderness Series 01 Matsutake is available at the LCBO for $49.95.  It is a limited release, so if you’re curious, get a bottle while you can!

If you enjoy learning about Master Blenders, you can read my interview with Emma Walker here.