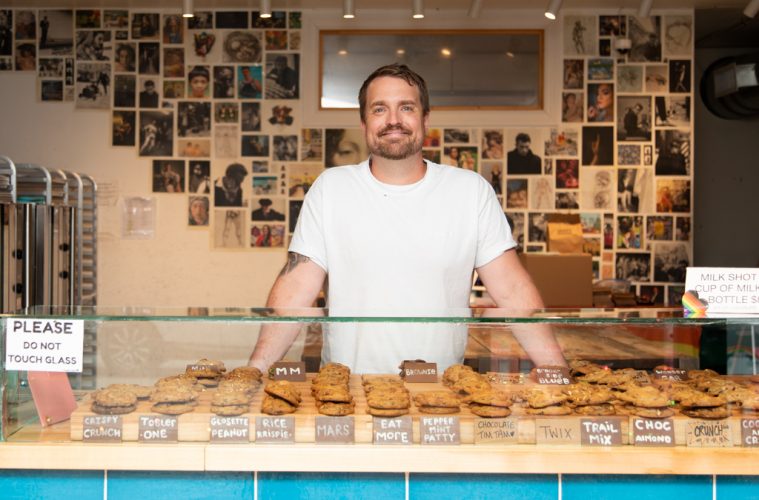 First impressions account for everything. So when I recently was granted the opportunity to interview Craig, of Craig’s Cookies fame, someone I’ve admired for a looooong time, I was sort of star-struck. But once we got gabbing about cookies, the Catholic Church and selling cookies at the side of the road, I quickly realized we had much in common.

When asked to discuss his recipe and his reply was steadfast and honest, “I could tell you but I would have to kill you,” I knew I had met my culinary match in Craig. Would death be so bad, if I held this secret recipe close to my heart? From earnest beginnings to his meteoric rise in Canada’s Baking Hall of Fame* (*not a real thing) I had a lot of burning questions for this proud thespian.

FROM COOKIE DROPS ON HIS BICYCLE TO MONEY IN THE BANK

Born in Canada’s greatest city, St. John’s, Newfoundland, Craig grew up baking with his mother honing her classic chocolate chip recipe and sharing cookies with friends and family. It wasn’t until his teenage years that he realized this recipe was really special. Craig brought cookies to potlucks and parties getting honest feedback, “these are the best cookies, ever,” was a common refrain. But still not enough for him to consider baking a vocation.

As a member of the Catholic Church, Craig once pictured his life as a priest, until the theatre came calling. Moving from St John’s to Halifax in 2002 to pursue an acting gig would lead to his big move to Toronto in 2004. Studying theatre at George Brown College led to the Shaw Festival in NOTL. Craig began selling cookies on Facebook, in between curtain calls, for fun and a little extra cash.

Little is the operative word there, at $8 a dozen and free delivery in Toronto it was an uphill battle, quite literally on a bicycle, to make a profit.

“Delivering that first dozen back then Instagram was fairly new. I took a photo and posted a pic of the bag. In that month I sold 200 dozen cookies. People started posting and the word got out. I went away did the musical Mary Poppins, came back and staring selling cookies again. And it worked out really well as an actor. Between traveling for work I could put a pause on the cookie shop. It created a need for the cookies. Popping back on socials to say I’m back in the city and someone would say ‘I need my cookie fix!!!’- I did that for five years. Cookies in the rain at the side of the road!”

When opportunity knocks, we rarely answer the door. So much in life comes down to those tiny forks in the road. Craig’s Cookies turning point came after a night of dancing on Church Street. Waking on a Sunday morning, Craig received a request for cookies. At a time when most of us would just roll over and go back to bed, he sprung into action. “I didn’t have the ingredients, I had no chocolate chips and half a stick of butter. I kind of privately hummed and hawed but, hey it’s a business if someone wants cookies I better do this. “

And that faithful batch led to a cover on En Route Magazine, who rang and asked to photograph his storefront and speak to his PR team- just minor details Craig was now determined to sort out.

FROM POPUPS AT THE MALL TO PARKDALE COOKIE GLORY

Approached by Williams Sonoma to court his cookies in their Yorkdale location, Craig had found some real estate to get his cookie empire up and running. For five days a week, Craig and one other warm body would heat up a pair of Breville ovens and crank out the cookies. This lasted for six months before burnout started to set in and he almost called it quits.

But when Craig spotted an ad for space available in his neighbourhood in Parkdale, he took the chance to level up. The space was as he envisioned, just enough room to grab a cookie and go, kinda like your grandmother’s kitchen. A warm and safe space to refuel. “Between the jigs and the reels, I took a risk- it was me and two other employees committed to working for two years,” said Craig.

After a tangle of bureaucratic permits, licencing and red tape from John Tory’s office, which Craig agrees is necessary but rough “It makes sense so silly people like me aren’t plugging ovens in and hoping for the best…” his Parkdale location was finally open. Self-funded from the get-go, Craig relied on his secret ingredients, being persistent and honest to get results.

A week into the grand opening BlogTO broke the story and cut a video that notched an impressive 1.4 million views. Overnight Craig went from two employees to six to keep up with the demand. “I was rehearsing a play at Buddies in Bad Times at the same time, and it just blew up overnight. It was huge, and I had no idea what I was doing.”

POP TARTS, PIZZA AND PIZZAZ, ANYTHING GOES AT CRAIG’S COOKIES

While investing all his energy into entrepreneurship, Craig’s Cookies opened four more locations, including one in St John’s. A true homecoming.

Projected sales are now hovering between $14-15 million, annually, with franchise opportunities adding to his already stunning growth plans. Obviously, he’s one smart cookie. But his smartest business venture began at the heart of his true faith, giving back.

Operating a business that is capitalist in nature, but baked in socialist ideals, Craig insists that it was an absolute no-brainer to give back, right from day one. “When it came to looking at profit I didn’t deem it necessary to keep it all in my pocket. I looked at communities I felt were marginalized or that I have been involved with as a Queer human being. So that’s why The 519 has been important for us to support. This past Canada Day we chose four different Indigenous communities and donated ALL our sales from that day to those communities.”

SO YOU’RE REALLY NOT GIVING US THE RECIPE?

The threat of death sounded sweet at the time, but cookies always taste better when someone else makes them anyway. Instead, Craig divulged how he comes up with all these curious creations. As a creative actor, he’s not bound by the same box you and I home bakers occupy. Sour Cherry Blasters, Pop Tarts, and even Pizza have appeared in his cookies. This limitless thinking is what created the brand. Craig empowers his team to play around with additions and get silly with Wonka-esque flair. I can’t wait to see what he creates next.