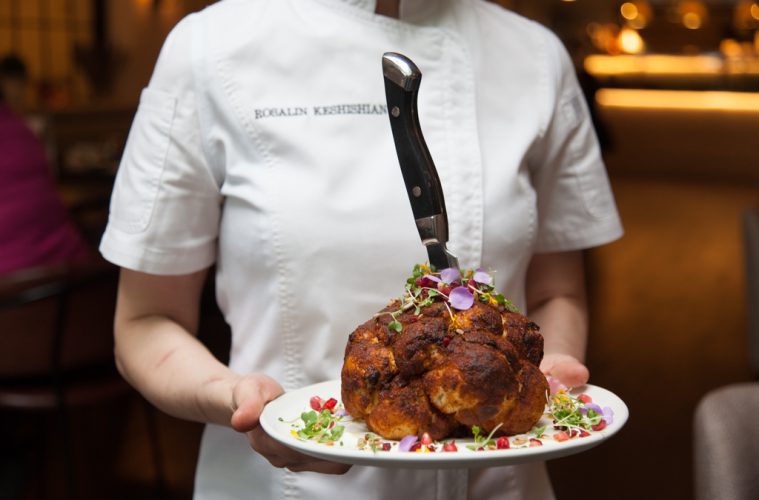 Babel restaurant is Oliver & Bonacini group’s latest outpost. Located at Bayview and York Mills, Babel takes over the old Mövenpick/Marche eatery that was a hallmark of this plaza for the last few decades. Change like this doesn’t come easy, but rest assured Chef de Cuisine Rosie Keshishian is determined to bring the best to this Mediterranean eatery, a first for the restaurant group that is slowly incorporating more global flavours into their empire.

And Rosie is undeniably successful in this effort, delivering modern and colourful dishes that marry the many flavours and traditions of nearby nations, paying tribute to Greece, Turkey, Morocco and Lebanon, a country she briefly called home, after fleeing Syria, before moving permanently to Canada. Her family left with only photo albums and family antiques and treasures, Rosie knew she could make new memories in Canada and provide her daughters with the stability and opportunity to follow their dreams. Her story of sacrifice and survival is beyond awe-inspiring (look for a full feature on Rosie’s rise coming soon to Ladies First.)

Chef Rosie was originally slated to be Sous Chef, but was upgraded to Chef de Cuisine. Overseeing the project, and the umbrella that is O&B, Executive Chef Anthony Walsh quickly realized Rosie’s potential and promoted her to this position, after she worked up through the ranks at downtown Bannock. But Rosie is quick to deflect, she’s inherently modest and credits her team for their success. “One hand is not clapping, I depend on my team,” says Rosie, and that spirit resonates throughout the space, the team feels like they’ve been together for decades, executing on dishes that exude old world techniques, like the hummus, which Rosie admits, is a process to make. The vegan dish highlights their dedication to the technique- it’s a recipe that requires constant attention to ensure it’s consistent, and dressed to impress with sumach and spicy green harissa.

Vegan plates are at home at Babel, the menu seamlessly blends in plant based options, a cornerstone of the Mediterranean diet. Stuffed Vine Leaves and Falafel are standard finds, but the Roasted Cauliflower for Two (lead photo) is certainly a fame-game Insta-grabbing effort, crusted in yoghurt and flecked with pomegranate seeds, the impressive dish is a total showstopper and further proof that veggies can be downright sexy.

And that statement carries over to the ribbons of root veggies, presented here with a citrus dressing and nutty sesame seeds, a pretty plate and perfect portion for pairing up with a lunch offering, like the chicken shawarma club, made on baked in house pita and a smear of labneh, the sandwich absolutely sings, with a perfect crunch from precision cut cucumbers and just pickled carrots.

Fire is a key element to the food program at Babel, the warmth from the 12 foot hearth emphasizes the effort, almost everything on the menu gets the heat treatment, and the braised lamb is thankfully subject to this cooking method. The lamb is intensely flavoured with earthy fenugreek and receives a cooling dollop of labneh and seasonal veg. It falls apart on the fork and feels like a hug. Plating like this, in a beautiful tagine and garnished just so is a reminder of why Uber Eats can’t always deliver. Clearly the proteins are just as important as the plants, and Rosie again is triumphant when it comes down to fish, with the tender and tasty BC Black Cod making a splash on the dinner menu (sorry).

Supported by Israeli Pearl Couscous, the buttery black cod is cradled by ribbons of carrots and red grapes, signature nods to the myriad of experiences on a plate. It’s easy to compartmentalize something like Mediterranean, instead here, the word is celebrated, and given space to incorporate methods and traditions from each other.

And cocktails and alcohol-free drinks are also part of that methodology, with herbaceous Rosemary Lemongrass or the sultry Apricot & Clove complimenting the menu from start to finish. Ditto goes for the extensive wine menu that brings bottles from Italy, France, California and Spain into the fold.

Clearly the current is running north, with many new globally inspired eateries advancing NoBlo (north of Bloor), times are changing, and the culinary demi-gods at O&B are definitely leading that charge.

All photos by Libby Roach. Thank you to Babel for hosting!