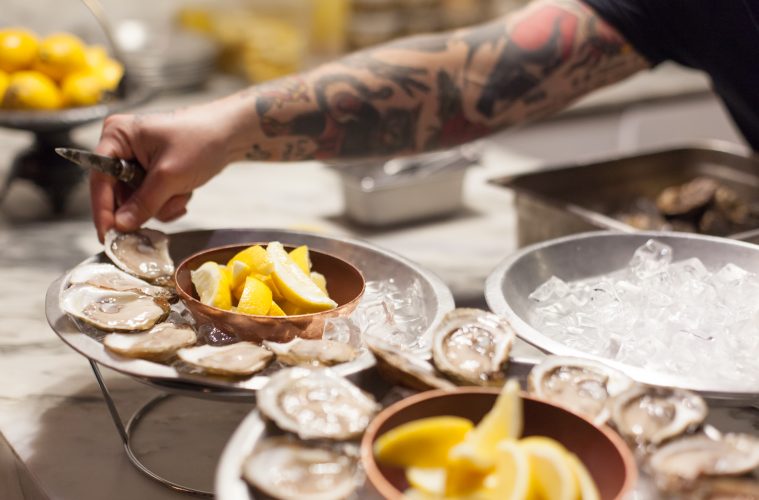 Brimming with sunshine and possibility, March is here, and it’s about f*cking time winter ends! The days are getting longer, the sun is shining brighter, and we’re all probably going to be a little less bitchy when the clock runs out on this lion of a month. There’s only 31 days to formulate your spring thaw, and maybe a little April’s Fools pranks too.

Irish eyes might be smiling but chances are they’ll also be pretty red-out at Preserve Indulgence‘s March 1st and March 15th dinner party dubbed Club Eden. The infused supper club will feature courses and drinks that are dosed out for dinner party fun, amped up with a live burlesque performance by Madame Aurora Knight and goodie bags galore.
Toronto Winter Brewfest has switched locations, now taking over the Evergreen Brickworks. Over 150 Ontario and Quebec beers and ciders will be on tap, with fire pits and the rugged backdrop of the Brickworks as a perfect antidote to winter blahs. Grab your ice skates too and make Tessa and Scott jealous. Kidding. The event kicks off this evening, and even boasts a Yoga throwdown tomorrow morning.
March 5th marks Mardi Gras, and if you can’t make it down to the big easy, then consider Southern Accent a close second. Live music, drink specials and a Crawfish Boil go hand in hand with beaded necklaces, so book your table for this reservations required party. 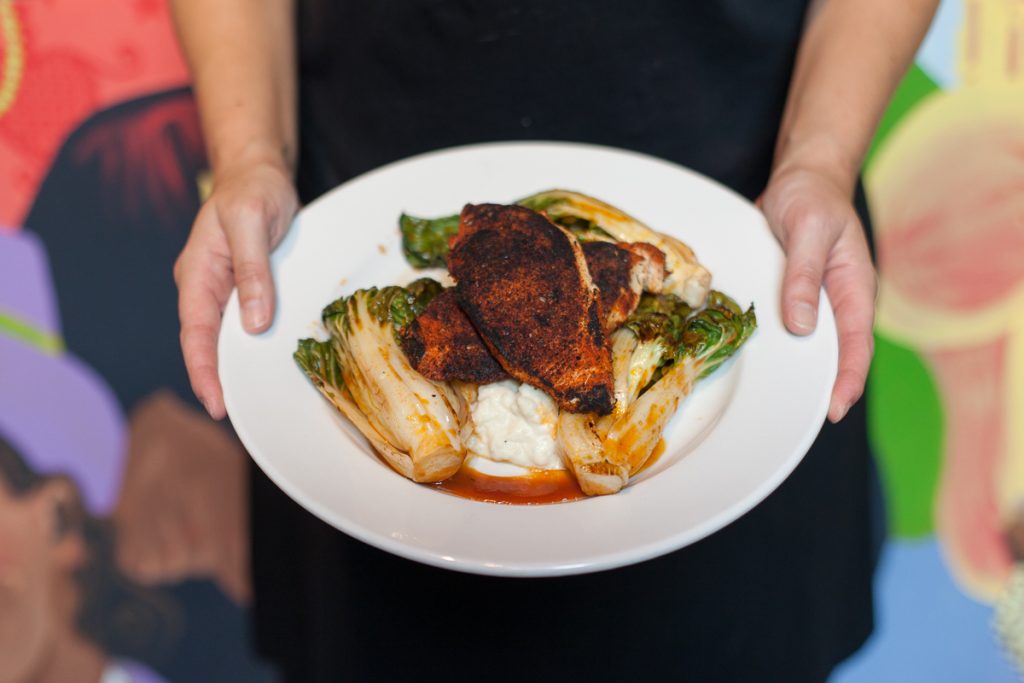 The parade is always a fun afternoon out, but nighttime gatherings for St Patrick’s Day are my actual SuperBowl. Options are plentiful but why not opt to make a weekend of it, kick off the party March 16th and go to the wee hours at Brooklynn Bar, with a party sponsored by Heineken. $5 whiskey shots and a photo booth seem like a good time, but heaven help you if you want to try and prove me wrong!
Chef René Rodriguez from Top Chef fame is courting a new era in dining, the highly Instagrammable Dinner with a View is launching in both Toronto and Montreal. If you’re a FOMO-sufferer from way back, then you’d probably be keen on throwing down about a mortgage payment to spend your time in a bubble for not even two hours, but I’ll stop now, you know the saying about living in a bubble and casting the first stone…

The CN Tower is the pinnacle of the Toronto landscape, so it’s fitting that it’s now a beacon for Aboriginal art too. REGALIA is running until March 31st, with Executive Chef John Morris pairing plates for both lunch and dinner to celebrate this artistic movement. Stay tuned on more about this amazing exhibit, Auburn Lane will have more coming soon! 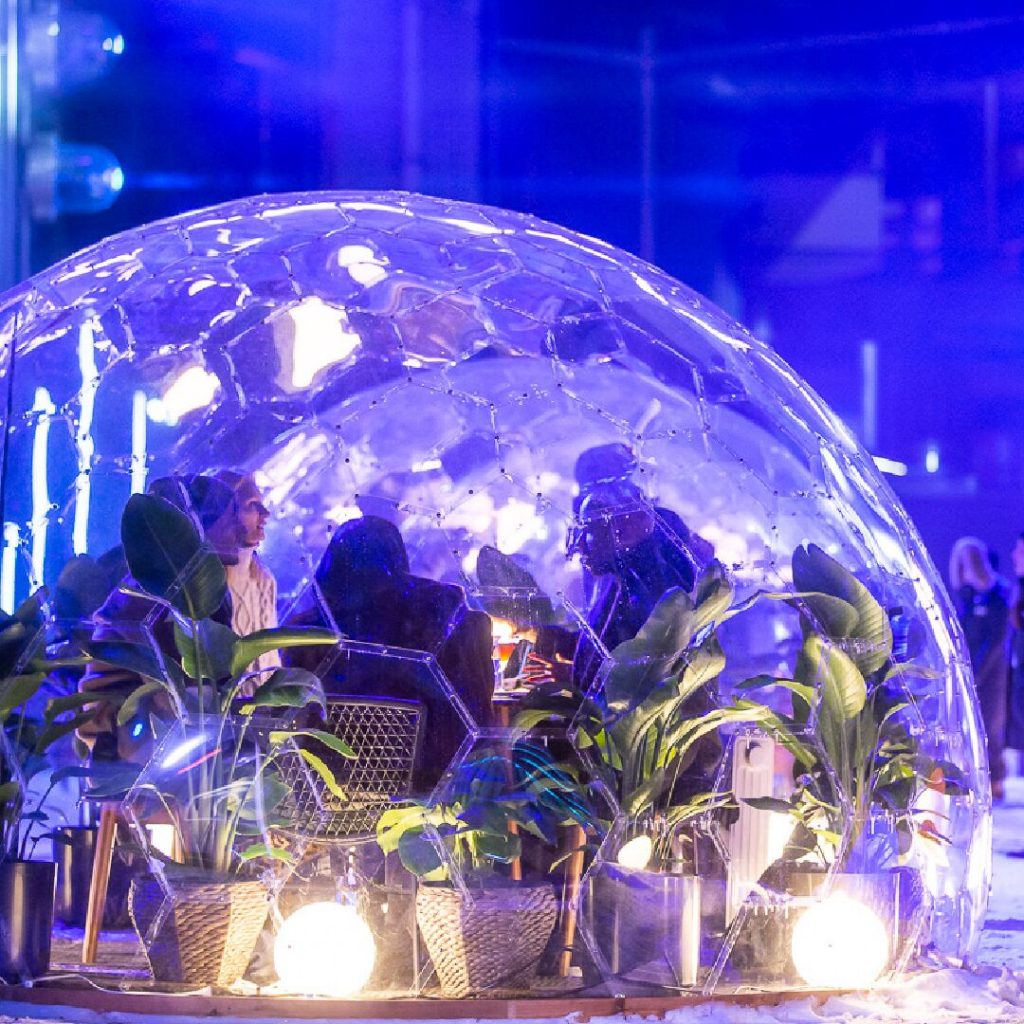 Dinner with a View

Our friends at Ufficio (lead photo) have just announced buck a shuck oysters each Tuesday and Wednesday. This Dundas West darling has long been a fave of ours, and buck a shuck is the cure for any mid-week blah moments.

The Beaches, or the beach, whatever you wanna call it, is now home to Grasshopper Salon. The restaurant, open for weekend brunch, lunch and dinner is helmed by Executive Chef Haruna Makino, who’s amping up the green goodness with a vegan plant based menu, with Japanese influences,and super fluffy pancakes.
The next big foodie free-for-all will see bloggers of all platforms congregate at ZIBA Berlin Doner, on the east end of Queen. Trendy German eats are going to be a thing, and who doesn’t love a good ol’ sausage fest. Parkdale, probably.
INK Entertainment has launched their newest Toronto hot spot, smack in the middle of clubland, Toybox Nightclub. The polar vortex prevented the grand opening party last month (sniff) but we’re still excited to check this spot out.

817 Sports Bar & Grill is ready to rock on Queen St West. The new bar takes over from the Dog’s Bollocks, an aging watering hole that mostly needed to be put to sleep. 817 says it’ll be modern, elevated and open til 2am every damn day.
We can’t wait for this O&B day-to-night clubhouse to open in the heart of the city, Maison Selby is going to be a sure thing for Bloor and Sherbourne. The heritage project- turned restaurant is reminiscent of their Auberge du Pommier spruce up, so we can’t wait to see what they have in store!
Bodega Henriette is opening a new location downtown on King + Sherbourne in mid-March. The homey cafe, restaurant, bar and depanneur is a fave haunt of locals, so this second satellite spot in the thick of things should fit well with all the office and condo dwellers.
Coming Soon
An Asian themed Planta is taking over the old Queen Street Nota Bene spot, with the same Chef, David Lee attached to the project. Vegan dumplings, heck yes!
Aurora is snagging the second Adamson BBQ, my northern friends tell me the new shop will be right on Yonge Street.
Seems like the renovation has been going on as long as the adjacent redo of Union Station, but by all reports the stunning CHOTTO MATTE will be worth the wait. The massive 10,000 sq ft space is looking to put Toronto on the map, with luxury Bento Boxes, super stylish sushi and so much more, all crafted by Executive Chef Jordan Sclare, who worked under Gordon Ramsey and all his Michelin-ness in the UK. Nikkei cuisine is the focus, and they’re dubbing it ‘an evolution of Japanese-Peruvian fare, where each dish and pairing will play on a multitude of colours and flavours that merge into one of the world’s most intriguing cuisines’. Read our exclusive interview with Kurt Zdesar here.

Manulife Centre is still being reborn, with anchor tenant Eataly attached to the project. If you haven’t been to this massive Batali’d eatery, it is legit a very good way to spend an afternoon, and now that he’s been shirked away from the project, we hope that the Toronto edition will be the best and brightest yet.
Pizzeria Moretti is about to unpack for an extended stay at Soho Met Hotel. Imported from Quebec, this pizza restaurant focuses on fresh, we’re excited to see how they make use of the old Luckee space.
Double star sushi chef Masaki Saito has announced he’s opening this spring in Yorkville. The new restaurant, Sushi Masaki Saito will be a departure from the other Michelin helmed restaurants here, as in Chef Masaki Saito has plans of actually sticking around. With sushi pals like Jackie Lin from uptown Shoushin here to guide him, we’re excited to welcome Chef to the city!
Closing
Shocking news via BlogTO reporting that a new eatery featuring dolled up caesars is taking over Claudio Aprile’s gem of a spot on King Street East. Score will be taking over Copetin. We will weep/sob until we hear about Claudio’s next moves (other than MasterChef Canada).

Straight from their Instagram came the announcement of the implosion….“We ended our roles as chefs/operators of Quetzal because we think the terms of our agreement were never met. We felt overworked, underpaid, undervalued and disrespected,” wrote Julio Guajardo and his wife, Kate Chomyshyn, referring to Grant van Gameren. Ouchie. He say’s he’s going to soldier on, and re-jig the space, but after blowing the budget on the build, it’ll be hard to overcome…

Longtime owner of Hiro Sushi has announced his retirement. Open since 1989, Hiro Yoshida pretty much made sushi a thing in Toronto with his eponymous restaurant. We wish him the best in retirement!