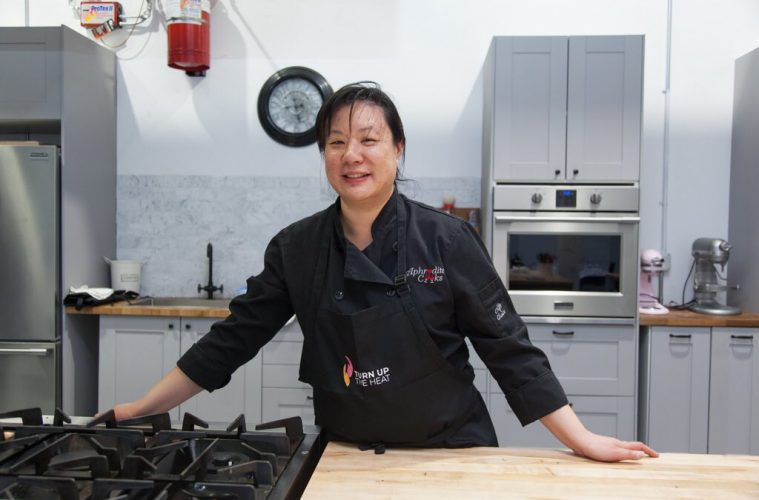 Aphrodite Cooks is a baked-in-Toronto cooking class run out of a tidy and spacious open-concept kitchen in Etobicoke by founder Vanessa Yeung. What originally began as a singles dating event in 2006 spiralled into something much more, with cooking classes, corporate events and catering added into the fold, Vanessa and her team have been burning up the Toronto food scene ever since.

Known as the ‘Queen of Dumplings’, this industry pro got her start at the Stratford Chef School, taking a stint at Scaramouche before settling into a corporate job at Summer Fresh Foods. Plating sexy food at one of Toronto’s top restaurants to juggling the demands of a product designed to stay shelf-stable for a solid month posed a paradox to Vanessa, it’s hard to go from one cooking extreme to another, and soon after joining Summer Fresh, she left for greener pastures. Finding her footing as a personal chef, this time for a beloved Maple Leaf goaltender (Ed Belfour), Vanessa thrived off providing him and his family healthy and organic meals, back at a time when those ingredients were hard to source. “I was at Whole Foods every week buying groceries. It was a great job, but hockey players come and go, and when he went, that’s when I started Aphrodite Cooks,” adds Vanessa. The idea actually came together after a conversation with Ed’s personal assistant who helped come up with the business plan. “We started in 2006 and began in Nella Cucina to begin our Singles Supper Club but I wasn’t making money. Women were signing up – they loved the non-bar format of our events, they liked the less-hostile environment, you get to have some fun, and maybe meet someone. We continued for a few years and added couples cooking classes, and they really took off. In 2011 I put the singles supper club to rest and opened my own space,” says Vanessa.

That Weston Road location put Aphrodite Cooks on the map, quite literally, with Flare Canada listing them as one of the best cooking classes in Canada in 2018. To be recognized by a national outlet was huge, but of course, that’s when disputes with her landlord caused interruption after interruption, forcing her to relocate to her own space that opened at the end of 2019. We all know what happened next, COVID struck and forced an unprecedented lockdown, which of course brought the dreaded pivot word to the forefront. Already comfortable in front of an audience, Vanessa regrouped and came up with virtual hosted cooking classes, which are for now a permanent part of her product offerings.

“COVID has taught me a lot about myself, as a chef, a business person, as a friend and as a parent. At the beginning of COVID, I didn’t know what to do. My kids, who were 10 and 8 were home from school, there was no work or work that I was used to for the last 15 years of Aphrodite Cooks. After wallowing for about a month I realized that change had to start with me.”

Her husband (who’s also her business partner) helped research and adapt to this new workflow, with a tricked out camera set up to cover all the juicy angles, Vanessa is now welcoming culinary enthusiasts from coast to coast in Canada, and even stretching as far as Europe and Australia. Clearly, there’s an appetite for online cooking classes and Vanessa is just hitting her stride, offering everything from complicated dishes like homemade pasta dishes like Plantain + Yucca Gnocchi from scratch to sexier offerings like couples Paella and Tapas. I was fortunate to have taken a class with a corporate team late last fall, and have had the recipes on repeat since. Vanessa instils a quiet confidence in each recipe step, bringing out the culinary best in each of us, no matter your experience level.

Aphrodite is the Greek goddess associated with love and devotion, two central ingredients to any delicious dish. Spawning a few marriage proposals along the way, it’s easy to spot why Vanessa has such chemistry with everyone who takes her classes. When you love what you do, you inspire others to embrace your passion, and in Vanessa’s case, there’s now no geographical limit to that reach.

Tuck into a class of your own and shop local- Aphrodite Cooks classes makes for a great gift idea!