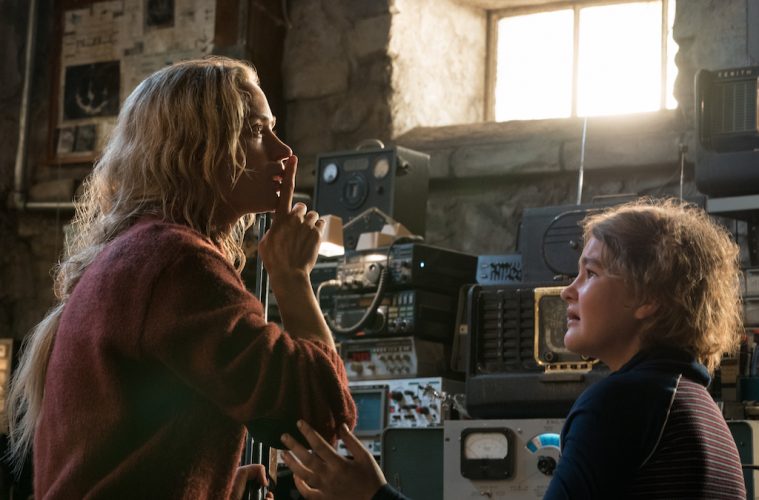 I’m finding myself not wishing for “quiet time” after seeing the trailer for the upcoming release of ‘A Quiet Place‘. This modern horror thriller is about a family who must navigate their lives in silence after mysterious creatures that hunt by sound threaten their survival. If they hear you, they will hunt you. The only way to survive is to make no sound.

In an interview clip provided by Paramount Pictures, director John Krasinski explains that whatever these creatures are, they seem to be all over the world. “There’s nowhere to go.”

The family of four that includes two children, and another on the way, must live in silence and they only have each other to rely on. I’m stressed beyond just wrapping my head around a newborn! Okay, I know it’s not reality.  But who comes up with this stuff? The film stars Emily Blunt, John Krasinski, Noah Jupe, and Millicent Simmonds. By the way, Blunt and Krasinski who play the parents in this firm are married in real life.

Krasinski explains how hard it is for the family to live quietly and to determine which sounds are safe and which ones aren’t. They walk along sand paths to keep things muted. The family uses sign language to communicate with each other as well as using lights to communicate. To say this is intense is an UNDERSTATEMENT.

The film just premiered at SXSW and initial reviews are starting to trickle in. I’m interested in seeing myself how a film can go the duration with minimal dialogue and finding out what sounds are considered non-life threatening.

Here’s the official trailer…by the way, if you need to sleep, don’t watch. I made that mistake and I’m writing this at 2 am.

Anyone want to talk about this after it’s released? LMK.