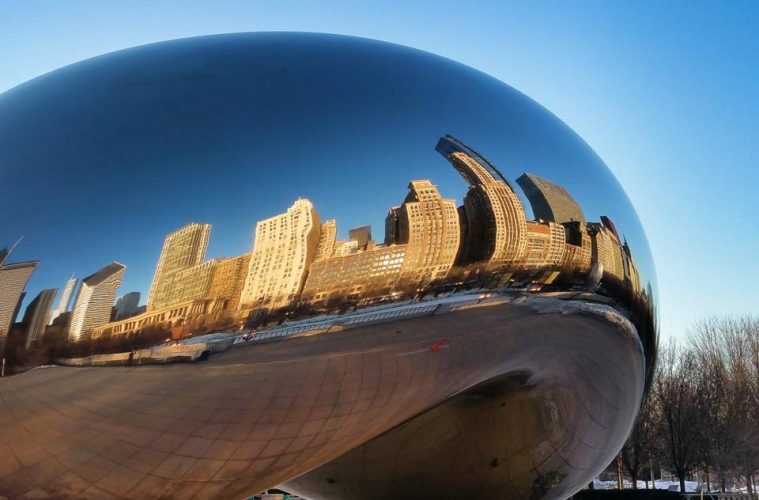 72 Hours in Chicago with Kids

I always look forward to my annual summer trip with my boys. For the last three years, our trips have involved baseball—their favourite summer pastime. We’ve tackled Cooperstown and Boston, and this year, we took a whirlwind 72-hour trip to Chicago.

I spend a painstaking amount of time researching family-friendly hotels, restaurants, and activities. This year I outdid myself! If you’re considering a trip to the Windy City, here are a few ideas to get you started.

We started our weekend by checking into a really cool hotel called The Chicago Athletic Association on Michigan Avenue, right in the centre of the action. When you search for hotels online, this one might not pop up right away, but I came across it in my research and it didn’t disappoint. It has a storied history as a private athletic club in Chicago. Everyone from famous Olympians and baseball players used to train and socialize there. It has dark, wood-panelled walls, a secret room that was once a speakeasy during Prohibition and a games room. There’s even a gym where the kids played basketball during some much-needed downtime. 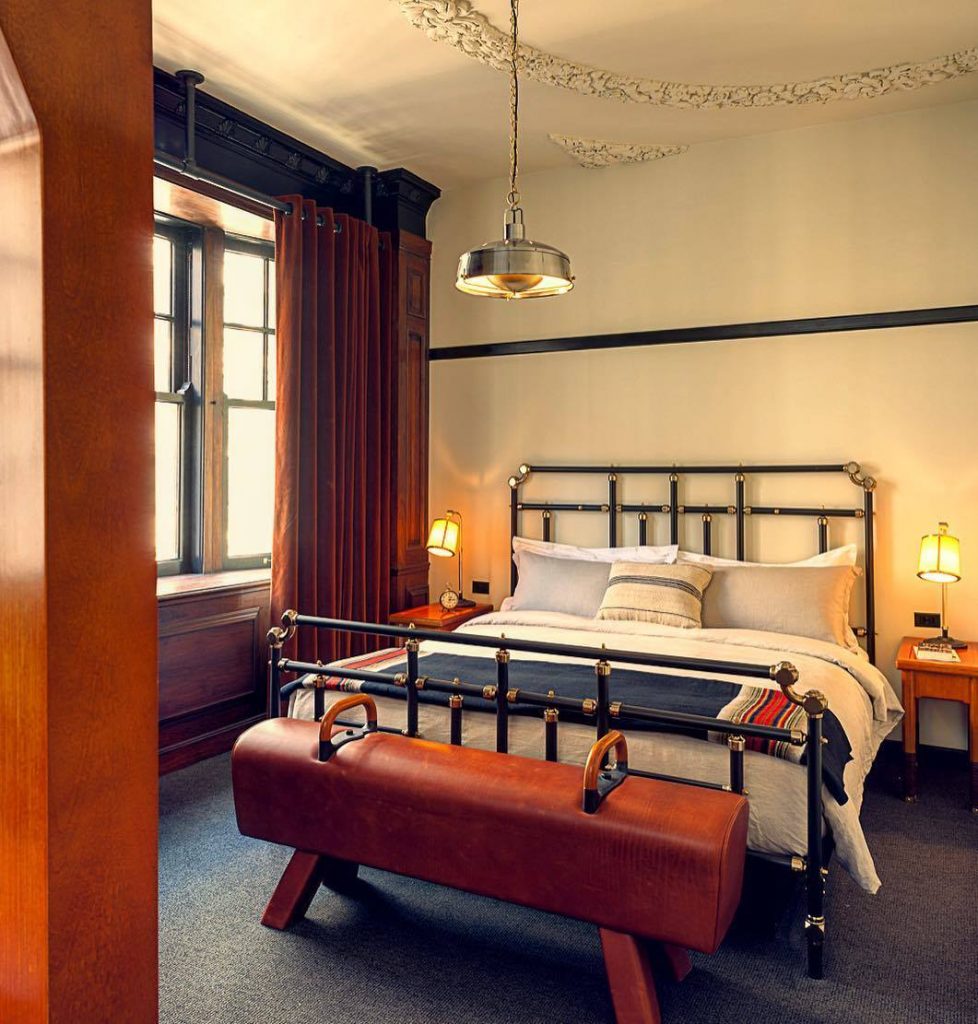 The hotel also has a Shake Shack on the main level. We had the most delicious burgers and the boys shared a cookies-and-cream milkshake. (Check out the hotel’s family package—it includes Shake Shack meal coupons!) The newest addition to the hotel was their Topgolf Swing Suite. It just opened this summer and the kids and I got to test it out. It was probably the best hour of our trip. We played dodgeball against zombies, pitched in the major leagues and golfed. We had amazing food from their menu while we played—gigantic soft pretzels with cheese dip, tacos, and a foot-long Chicago-style hot dog. The only rule in Chicago when it comes to hot dogs is that you don’t eat them with ketchup! One of my kids couldn’t resist breaking the rules, but the other one was more adventurous. He ate his the traditional way, with onions, hot peppers, and pickles! 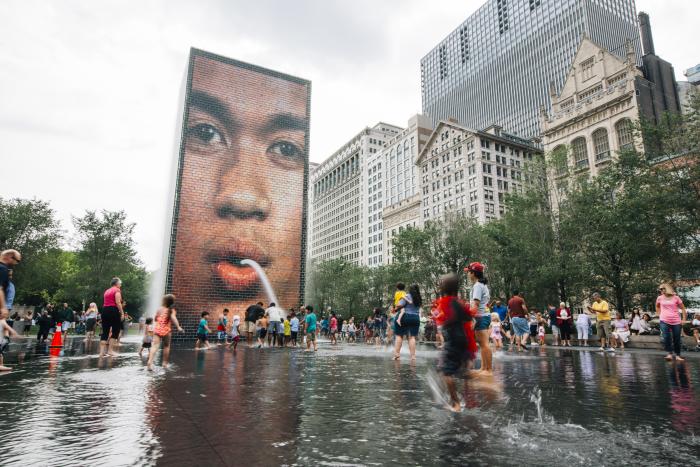 A trip to Chicago wouldn’t be complete without a walk to Millennium Park, which was actually just across the street from our hotel. We arrived on a boiling hot day, so we took shade (and some photos) under the famous Bean sculpture. Another cool feature was Crown Fountain, which is a gigantic, wet interactive art installation and video sculpture. It’s sort of like a splash pad where the faces of local Chicagoans are projected on huge video walls that spit water at you. It was unlike anything we’d ever seen before. Tons of people were there splashing around. It operates from May to October and is a must-see if you’re going in the summer.

After Millennium Park, we did a tour of Wrigley Field. We took tons of photos as we went behind the scenes of one of the oldest ballparks in the MLB. We saw the dugout, the ivy wall, and the locker room. The kids were captivated. Across the street after the 1.5-hour tour, we had an amazing meal at Smoke Daddy BBQ. The kids had loaded nachos, which came piled high on a cookie sheet. We also had ribs and a variety of smoked meats. We tried as much as we could handle. It was one of the best meals we’ve ever had. We ended the day on a high note, but very full! 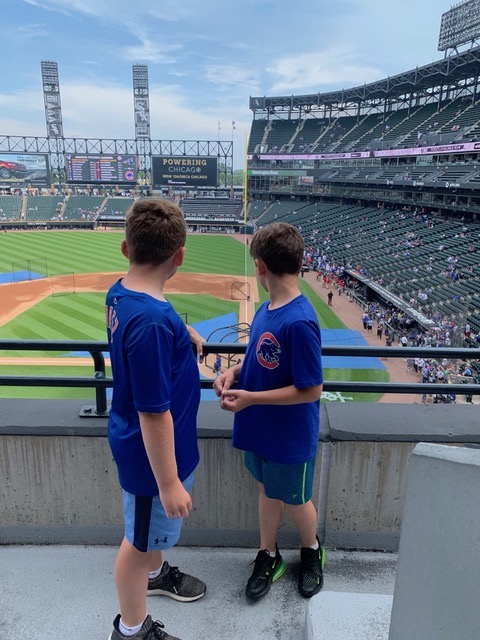 The next day, the boys indulged me and walked up and down Michigan Ave, aka The Magnificent Mile. There’s tons of good shopping but trying on clothes wasn’t something the boys wanted to do. Instead, we shopped for souvenirs for friends and family at home—Cubs keychains and an Al Capone t-shirt for my husband. The boys also got Javier Baez t-shirts, which is their favourite player on the Chicago Cubs. We waited in line Chicago’s famous for Garrett’s Popcorn, which was well worth it. The caramel-and-cheese mix is their favourite! The Riverwalk is pretty and has lots of cafes and restaurants along the way. We also went to a big tourist attraction called Navy Pier. The lines were too long for the Ferris Wheel but there was more souvenir shopping inside. (A cautionary tale: we were there for the July 4 long weekend and the boys wanted to watch the fireworks at Navy Pier. I had a gut feeling it was a bad idea and refused to take them. The next day on the news we learned there had been “an incident.” During the day, though, the place is packed with families and I felt comfortable bringing the boys.)

We heard the lines for the Willis Tower (formerly the Sears Tower) were too long, so we passed on the views from the Skydeck. However, we did do the architecture boat tour. We chose a Wendella cruise, mostly because we arrived a few minutes before that particular cruise line was scheduled for departure, and it was a good choice. Our guide was funny and explained the history of Chicago through its buildings. The kids were bored at times during the 1.5-hour ride, but I loved it. Whether they admit it or not, I think they liked learning some cool facts about the city’s architecture and history. 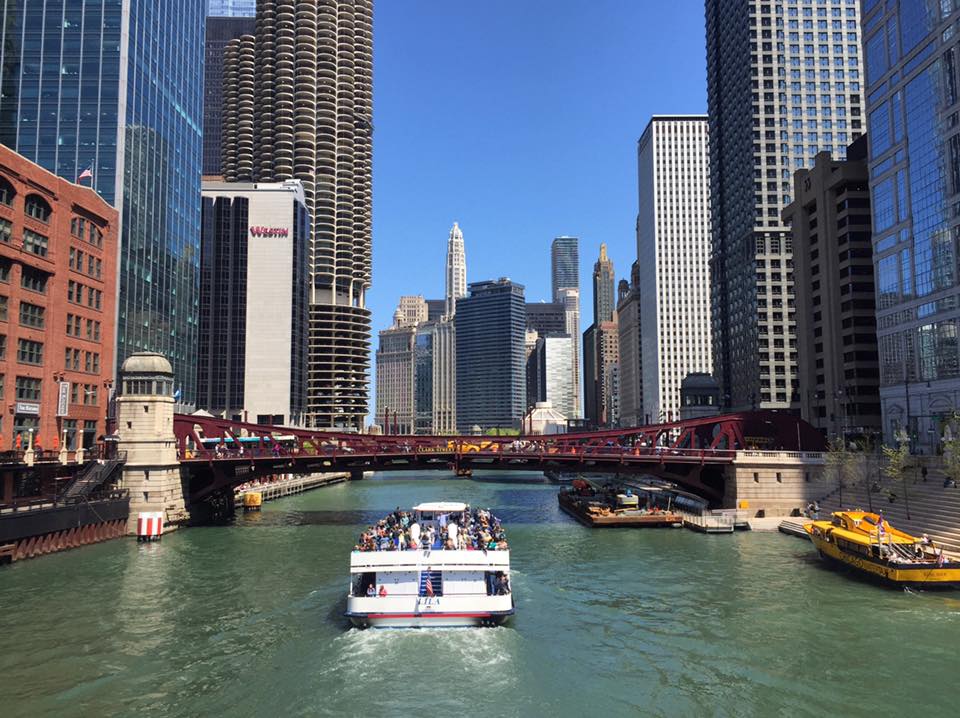 A few other very cool things we did were The Best in Chow Food Tour through Chicago Food Planet. It was a three-hour walking tour of Chicago’s best food. We made it to Lou Malnati’s for authentic deep-dish Chicago pizza. It was amazing and the highlight of the trip for one of my boys, who popped a lactose pill before diving in. He hadn’t had real pizza in a long time! But I’ll be honest—as much as I was enjoying the tour, the boys were bored out of their minds. By then, it was hot and they’d already had a morning of history on the architecture tour. They couldn’t stand and listen to another fact about Chicago. We ducked out early and didn’t get to have some other foods on the trip. I might not recommend it for kids—unless yours are older or have a lot of patience! 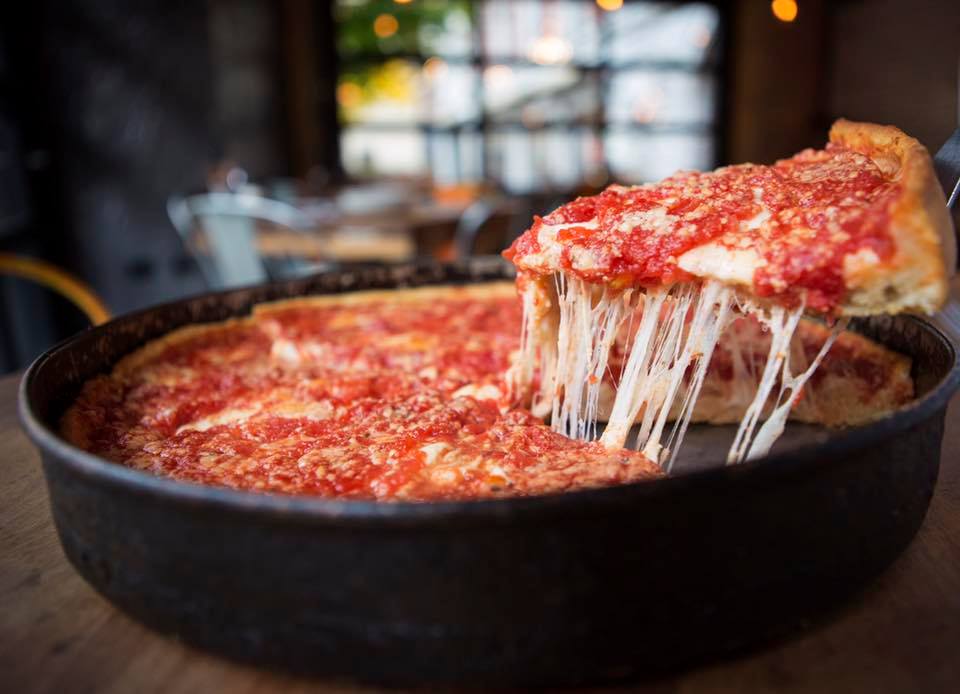 A restaurant the boys did love was called SafeHouse. It’s a spy-themed restaurant where you need a password to enter. Of course, we didn’t know the password and had to dance to get in! Once inside, it was like a James Bond hangout. There were buttons to press, safes to decode and clues to solve before dinner arrived. We managed to find a secret exit and ended up out on the street before dinner. We had to get back in through the front door. There was also a great photo booth that made us look like we’d been to other cities around the world. It was as if we were really on a mission. I’d highly recommend this spot! 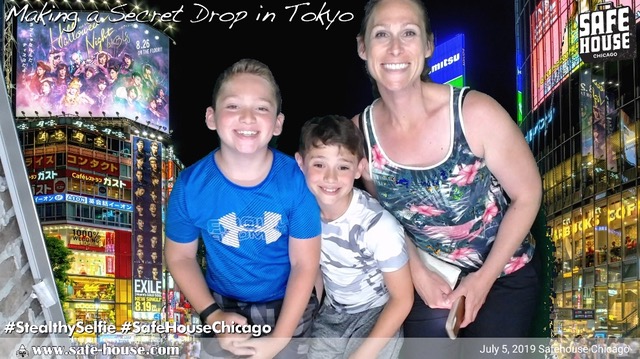 On our last night before flying home we went to a baseball game. We saw the Sox against the Cubs for some inner-city rivalry. We went early to Guaranteed Rate Field and waited for autographs by the dugout before the game. Fans were friendly and it wasn’t the same sort of intense rivalry as when we saw the Yankees vs Red Sox last year in Boston. There was a fun xfininity Kids Zone, too, where you could run bases and pick up some swag. The kids really enjoyed the experience. 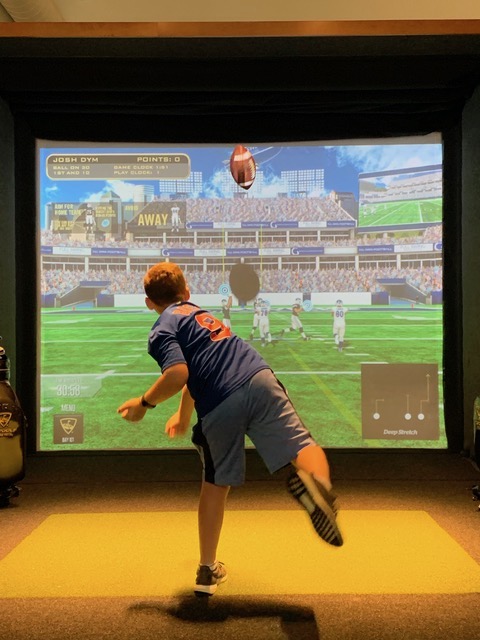 And now that we’re home I’m pretty pooped. We did a lot in a weekend. Chicago was a great choice!